and lighthouses of the East coast

In June, 2016 I hitch hiked the US from NYC to San Francicso. It took me 5 weeks and became my favorite trip of all times. I started a blog about my journey, but was too busy on my way to keep it going. All there is - 2 posts and some travel notes on Instagram. Here’s the first post just to keep some memories of this epic adventure.

My trip started in New York City. Any word I can say about this city will be just another drop in the ocean. I just hope you will see some of its splendour through my eyes – I have put the whole photostory on the blog. 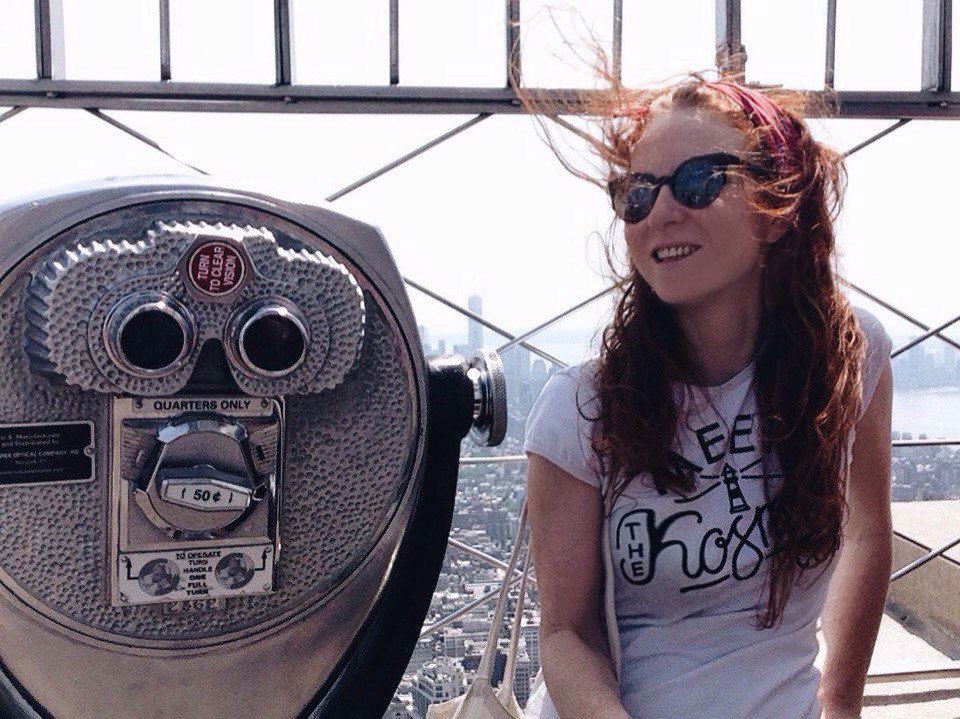 May, 26th was the day when a neat big city girl turned into a backpacker – I went to Connecticut to visit my friend Masha. A train from a fantastic Grand Central Station (check it out when in NYC, constellations on the ceiling are impressive) takes only 2 hours and costs $16 to get to New Haven, where Masha works as a biophysicist at Yale.

Masha’s postcards with lighthouses of New England was one of the reasons why I came up with this whole USA trip – so we had a nice travel plan for the weekend.

But before that I got to see some of the landmarks of New Haven. For this mission I got a beautiful bike, a dress and an American bench from Masha. 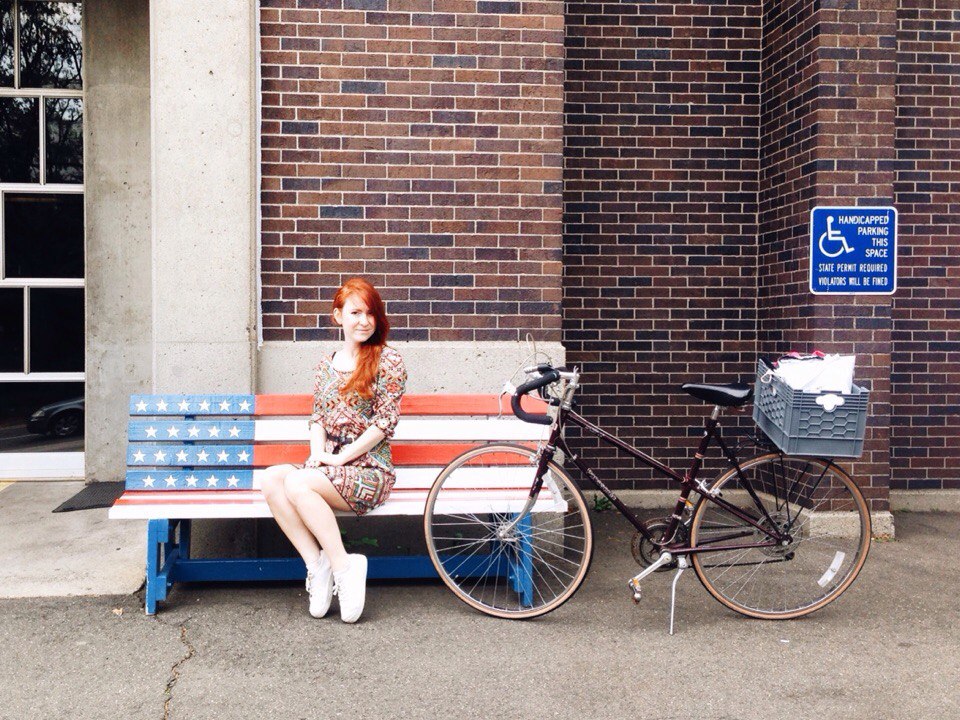 Did you know that the most beautiful street in America is located in New Haven? Both, Charles Dickens and Mark Twain said so about the Hillhouse avenue, which has many nineteenth century mansions on it. As for me – I’ve seen so many other, more beautiful streets. Even in New Haven – it looks like Americans always compete with their neighbours on whose house and lawn look nicer. What a useful competiton for any town! 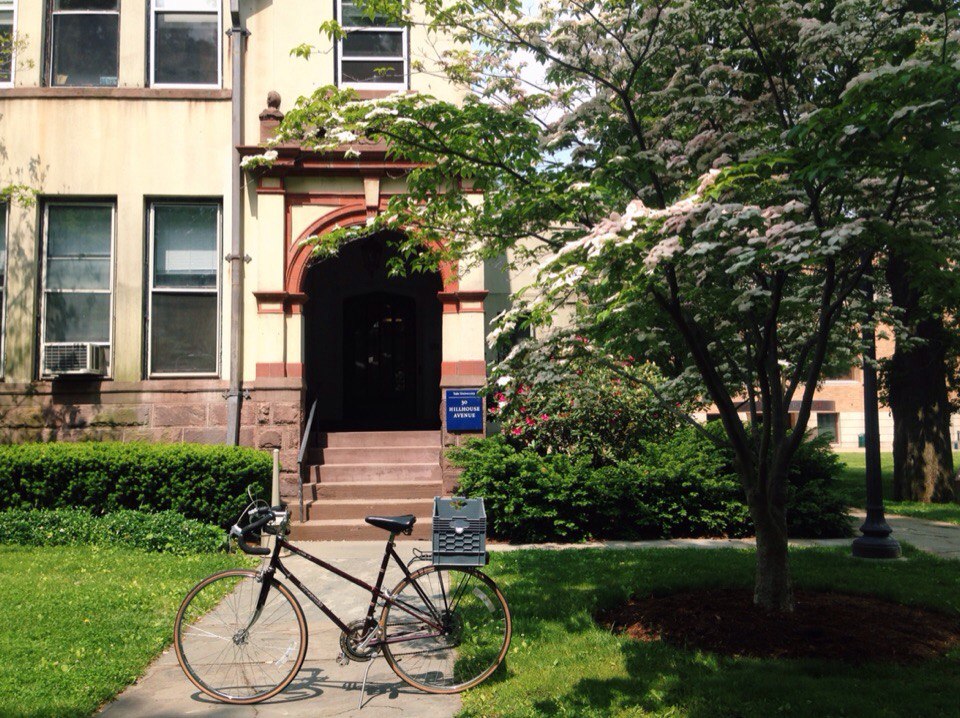 What I really enjoyed was visiting the Yale University Campus. Its Gothic architecture brought me back to one sunny day in Cambridge, UK, where I cycled in admiration, imagining that I was in Hogwarts. Look what we have here – cycling, history, magic! 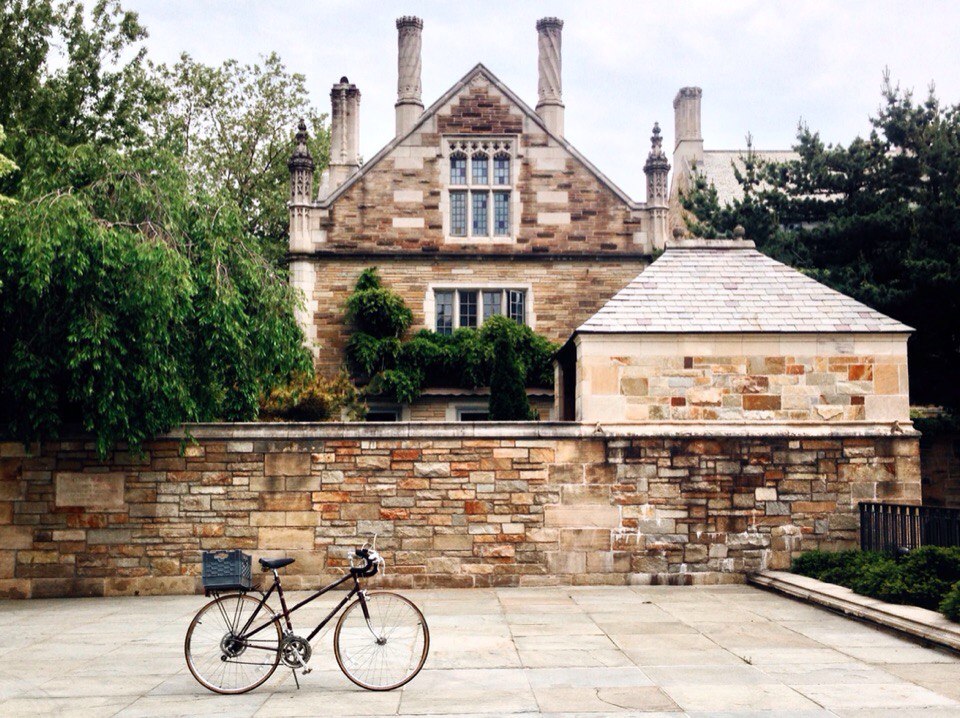 The library is outstanding – it looks more like a cathedral; and the inner yard is all in bloom. 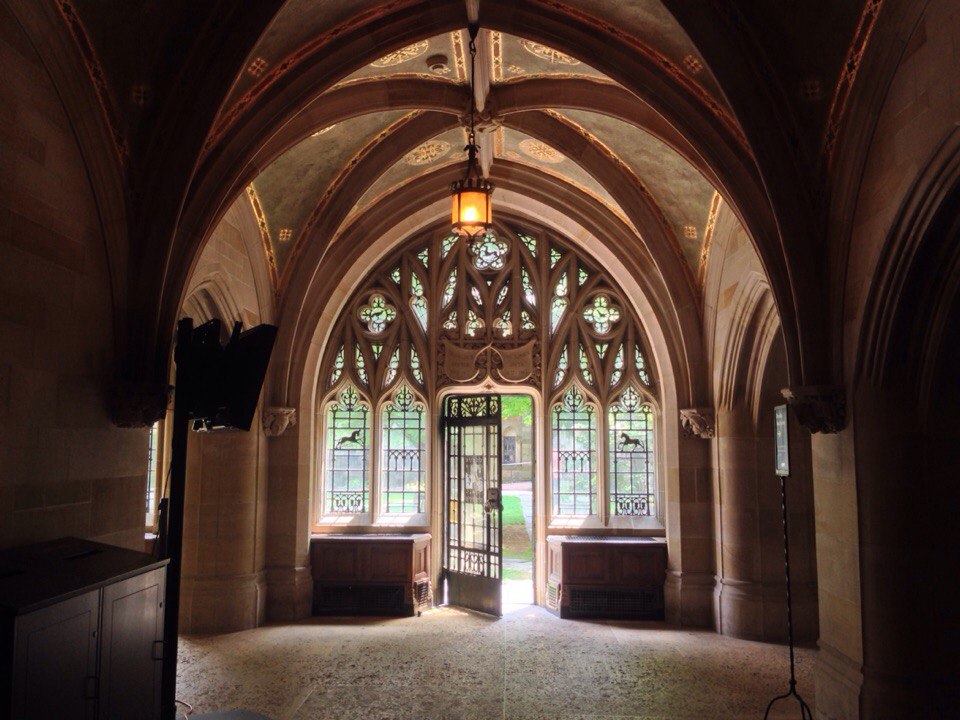 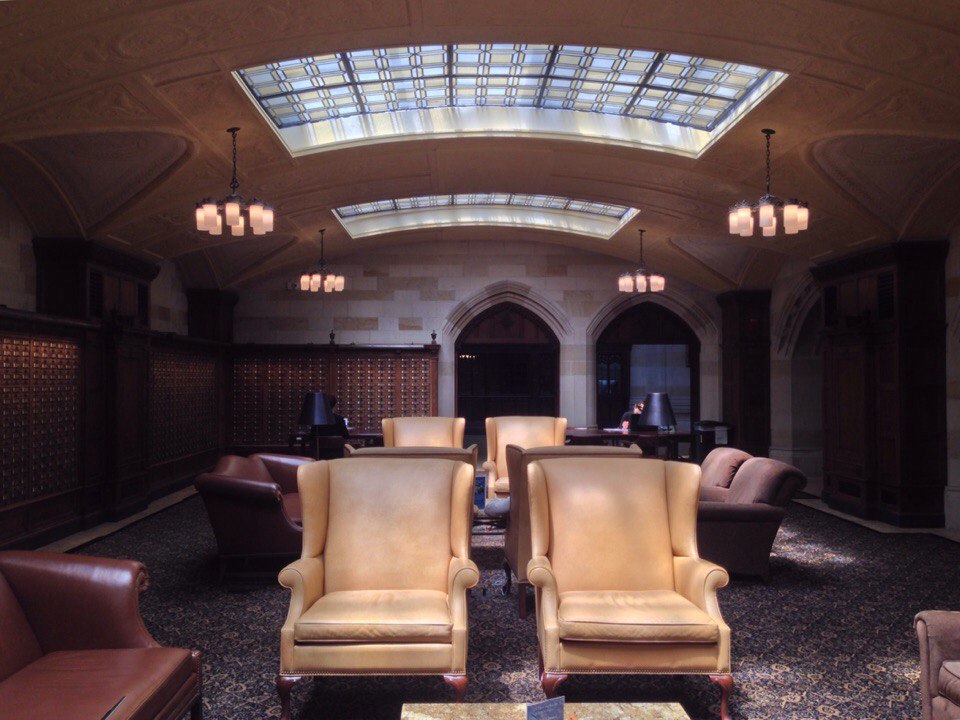 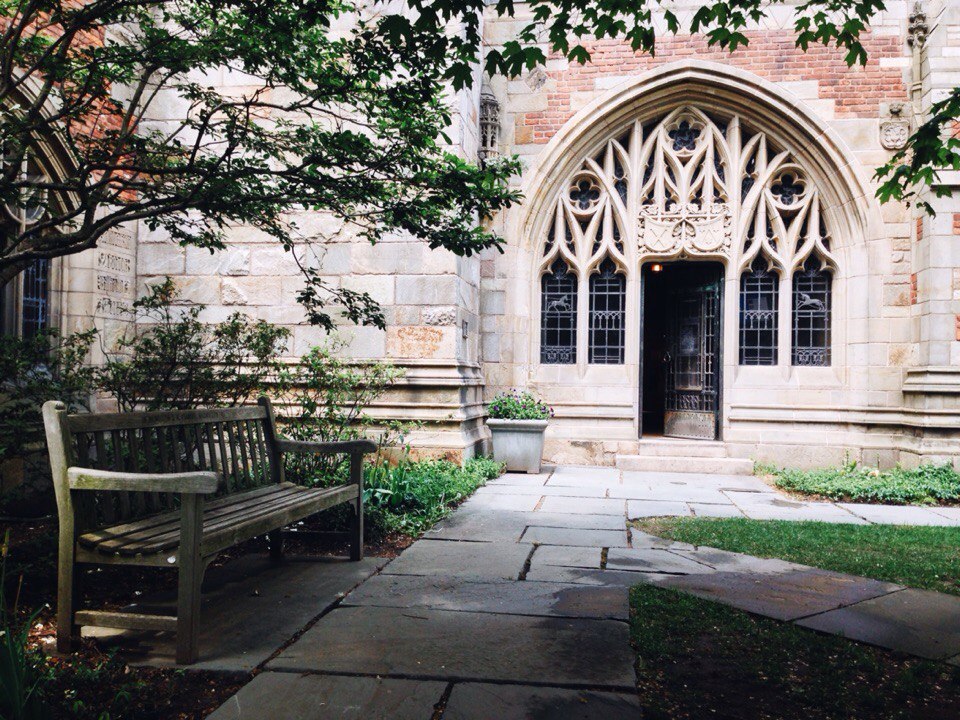 I also got to visit the lab where Masha works. We have even filmed a little science show there! 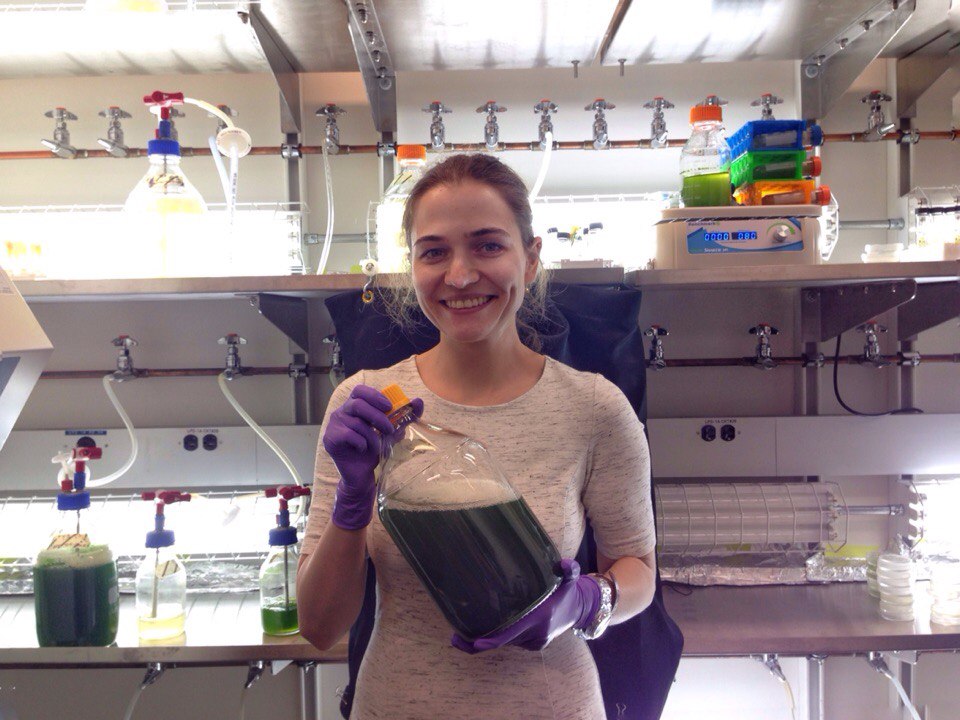 I took a ride up the hill to get the view of the city, but almost got a sunstroke- midday sun was an evil companion on my way up! But the view was worth it. By the way, the black flash in the sky is an eagle! 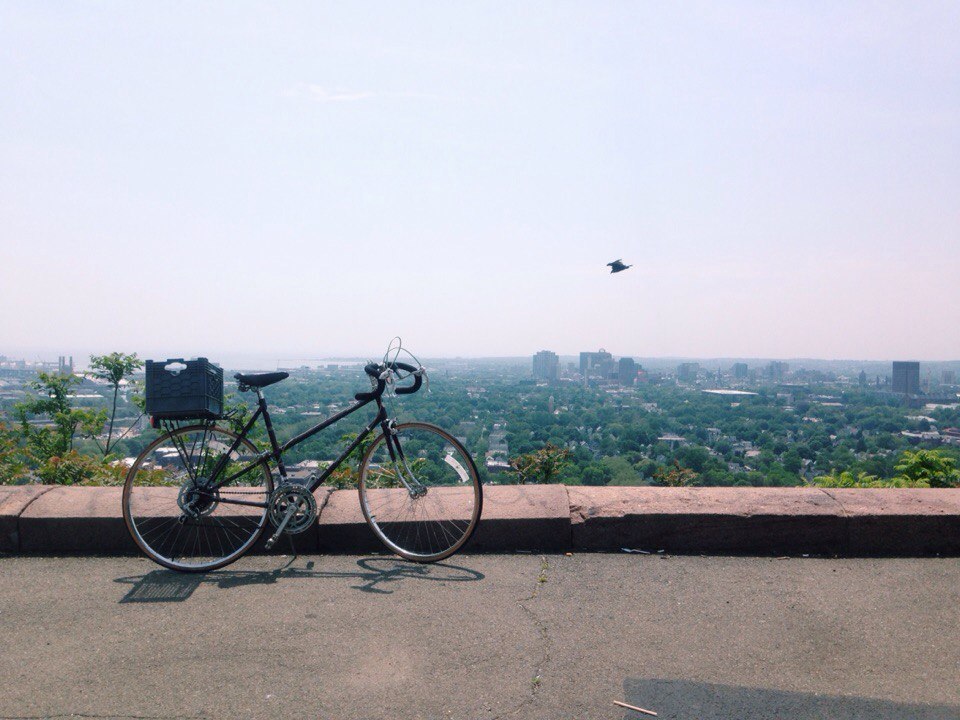 And the way down – even better! Speeding down and breathing in some flower and wood scents was so reviving after the dust and heat of New York! 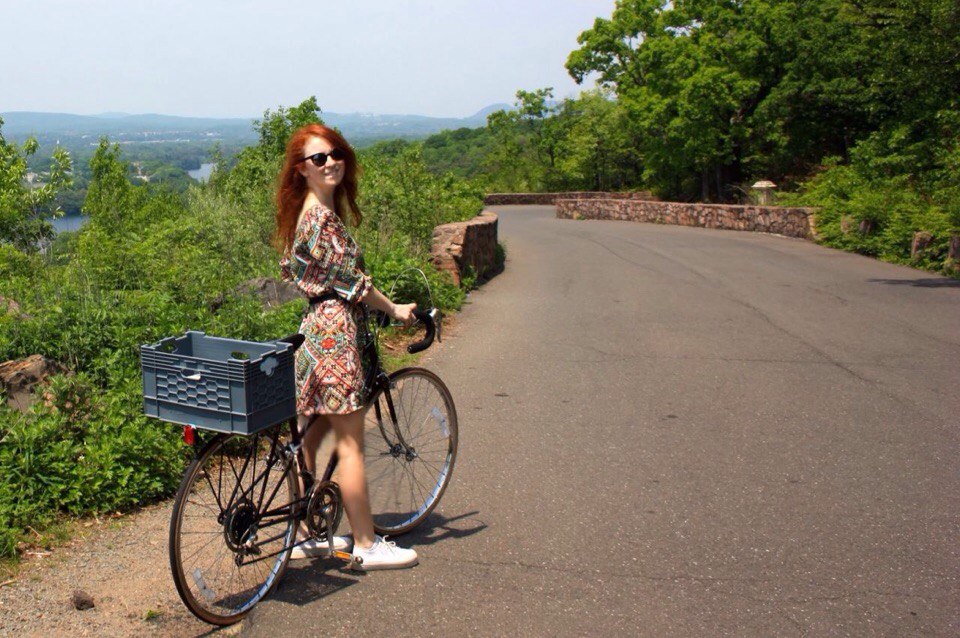 The evening was fun – we have had a little pj-party with nail-painting and hot chocolate. We tried to come up with a plan for our upcoming lighthouse trip, but very soon realized that there were just too many lighthouses in New England to see them all.

By the way, this is a great website that I use to learn about lighthouses on my way: lighthousefriends.com. You can pick a state on the map and it will show you all the lighthouses in this state.

The first one we visited was Avery Point Lighthouse – we saw a picture of it and decided to take a glance on its unusual design. 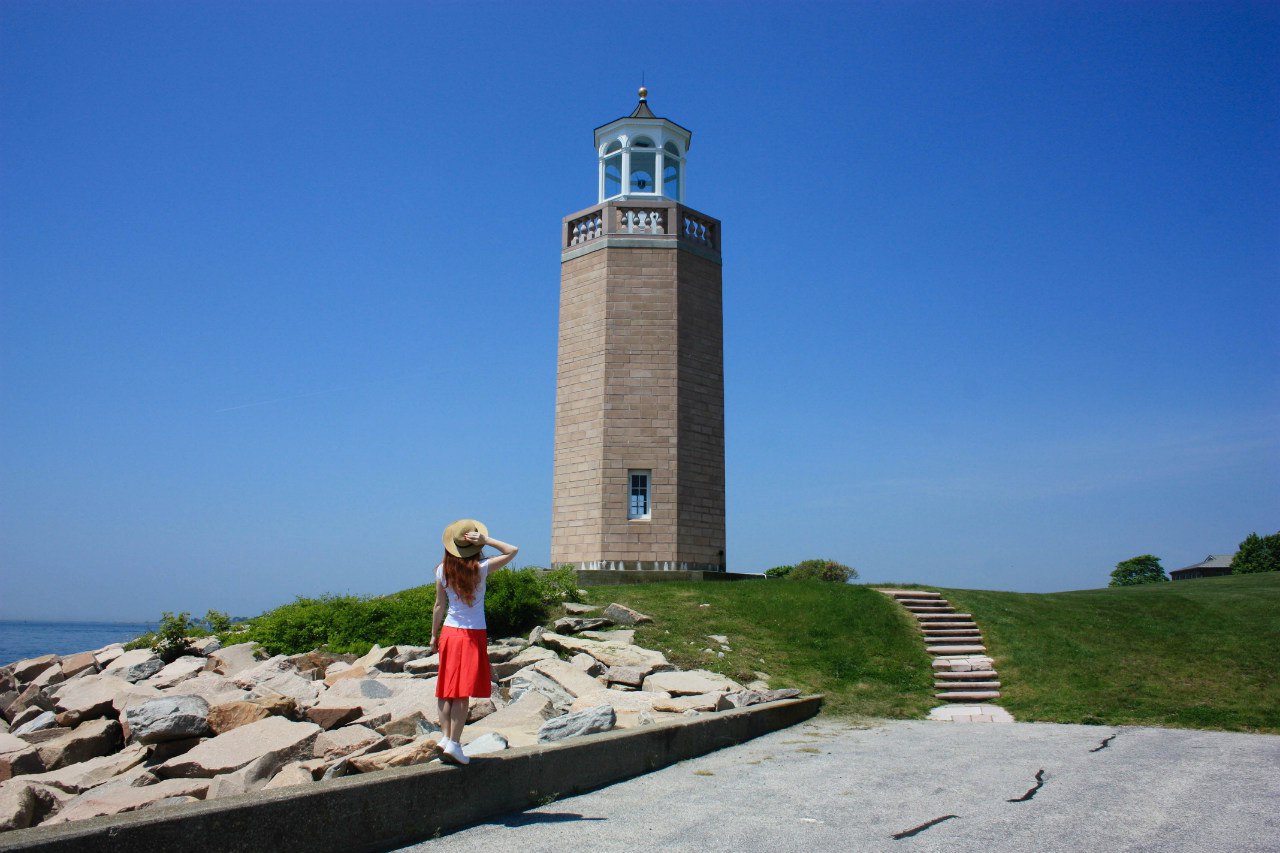 It was only active as a navigational aid from 1944 to 1967, and it never had a resident keeper. Only the dedicated efforts of a group called the Avery Point Lighthouse Society saved it from almost certain oblivion. Many local businesses donated to help the restoration of the lighthouse and in 2006 it was relit.

The path to the lighthouse keeps memory of this day and the names of those who helped. 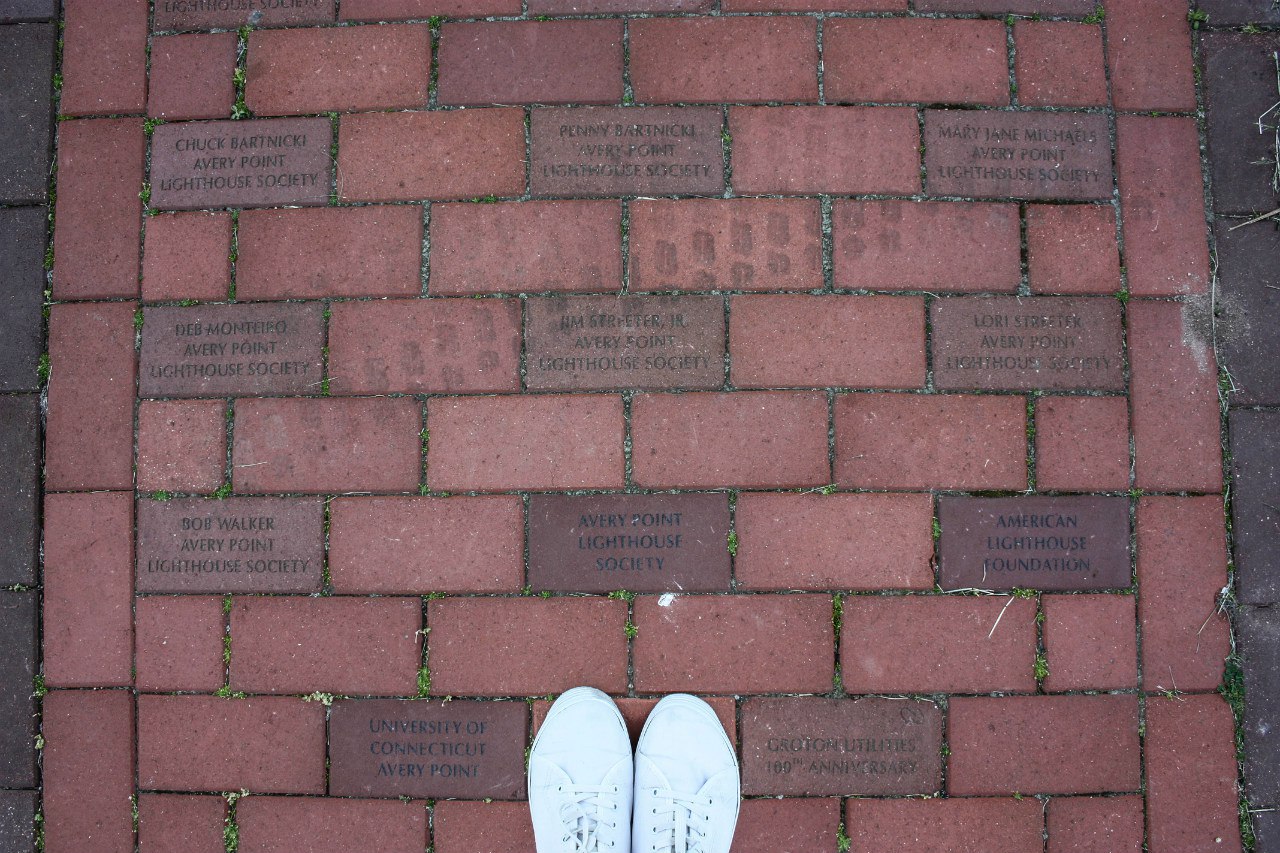 There’s another lighthouse, a very old one, at the boat station near the Avery Point Light. I can’t decide which one I liked better. 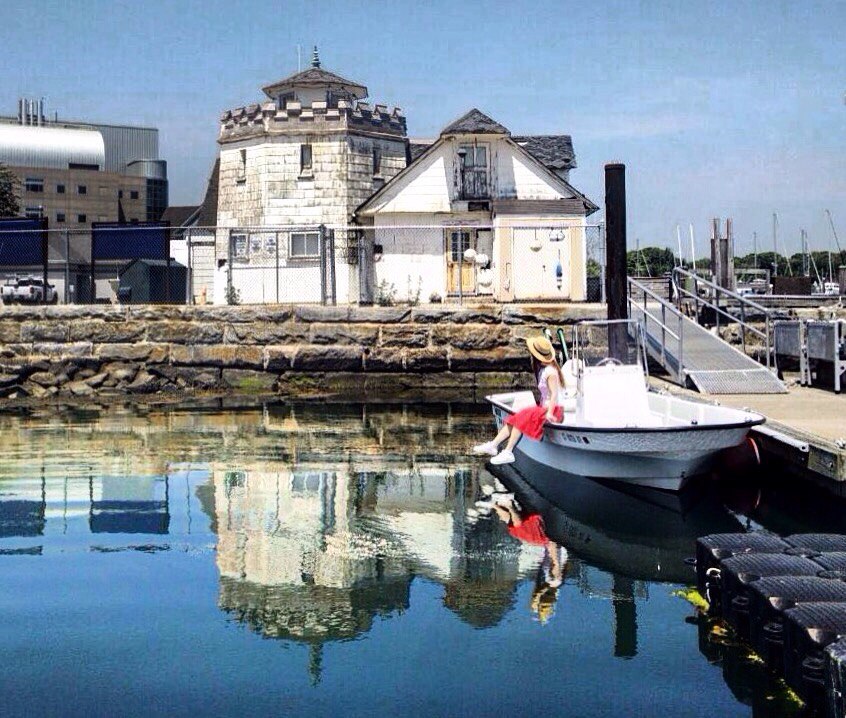 The old mansion on the hill looked very inviting. 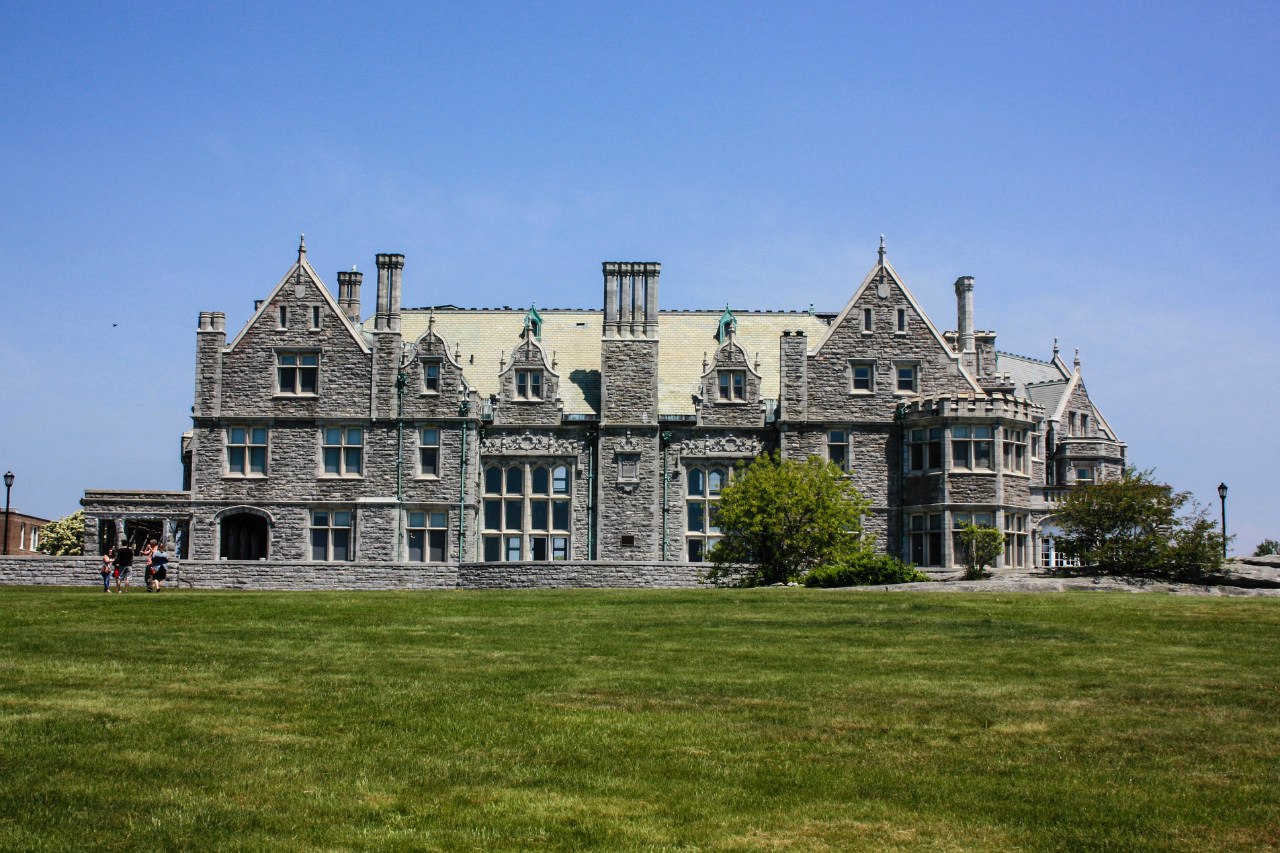 The interior was even more impressive than the outsides: completely empty, no furniture or paintings, but there’s no need for decorations. Huge windows, lots of light, two-story fireplace, a winding staircase of imported Italian marble, and paneled walls carved by Italian and German craftsmen – wow! 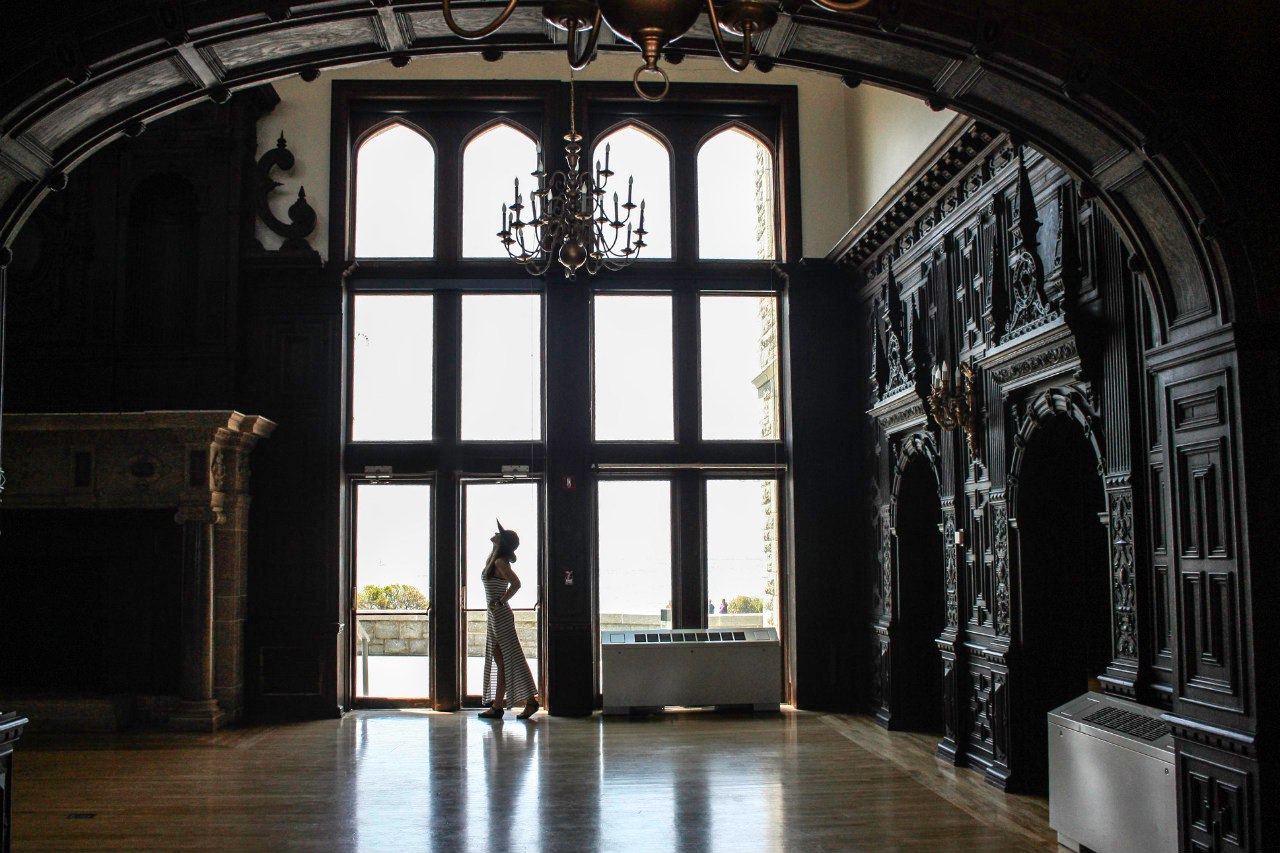 Passing through big bridges of Rhode Island we could see some of the lighthouses from above. A car roof window is pure joy!

This is Rose Island lighthouse view from the top of the bridge: 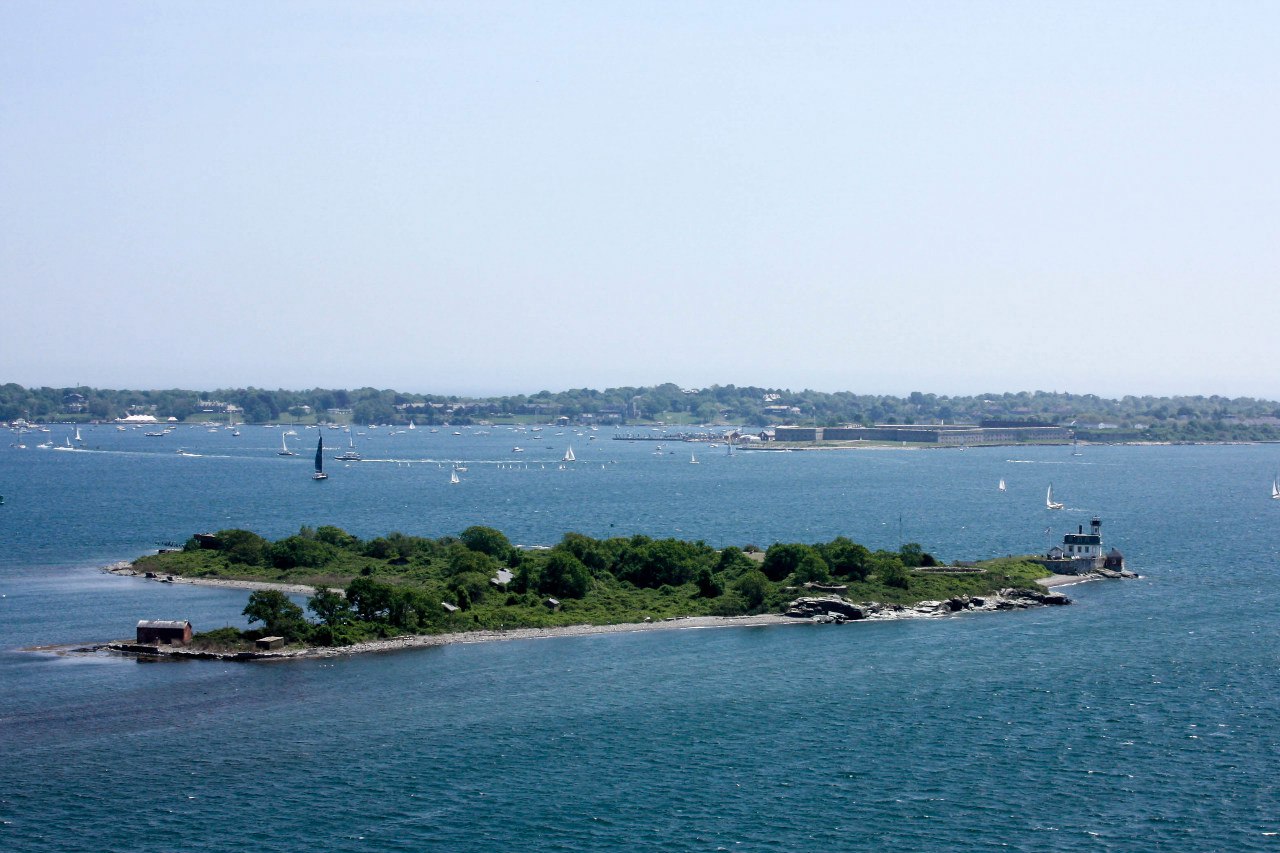 …and this is a little video of me enjoying the ride )

Great day for a roadtrip, great place for a picnic – Castle Hill lighthouse. Small, but picturesque, and the seaveiw is just breathtaking. The sound of a fog bell, constantly ringing on the wind, created a very special soundtrack to the scene – a little sad, but calling to the new horizons. 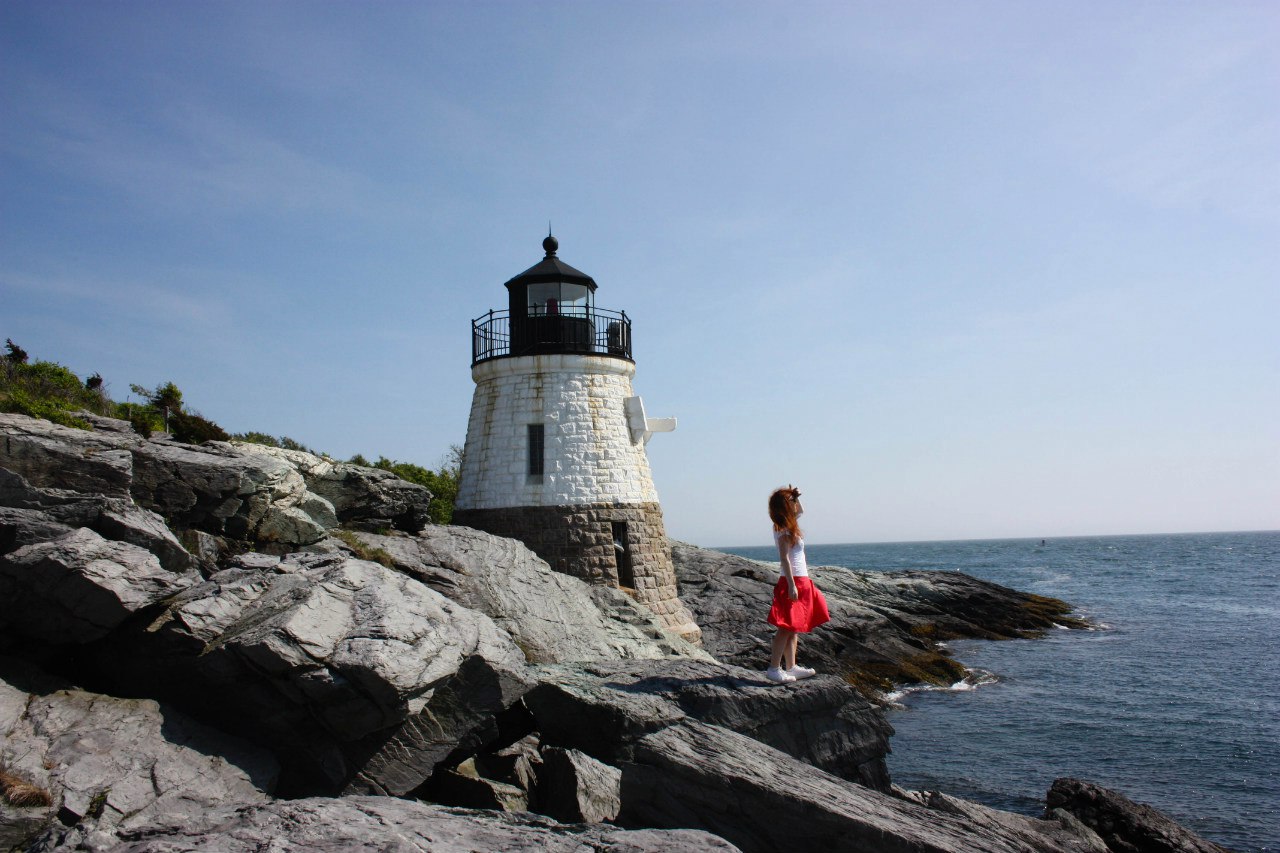 Cape Cod might be the place where the pilgrims came before Plimouth, and now it is a popular place for summer weekends – a lot of beaches, cute summer houses, restaurants and lighthouses, of course. Many of lighthouses just pretend to be ones – they are just built as an attraction for tourists near bars and hotels. But this one – Bass River Lighthouse – is real. Even though it has a big hotel in its building. 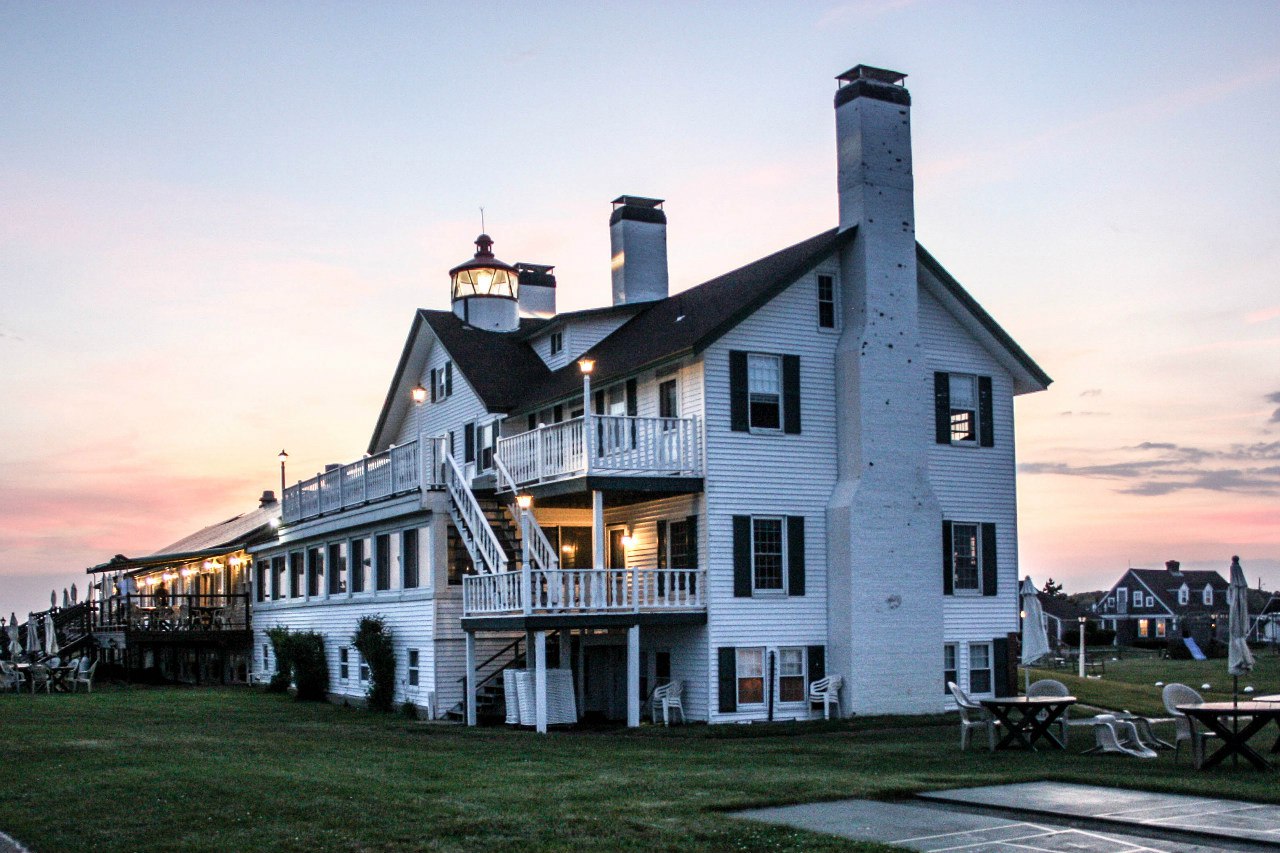 So many dream of spending a night in a lighthouse – this is a good chance for you. You can even take a lighthouse beach shower!

There was nothing special about the Chatham Lighthouse, but we have brought something special with us. Amazing how much beauty and special atmosphere you can create with water and soap ) 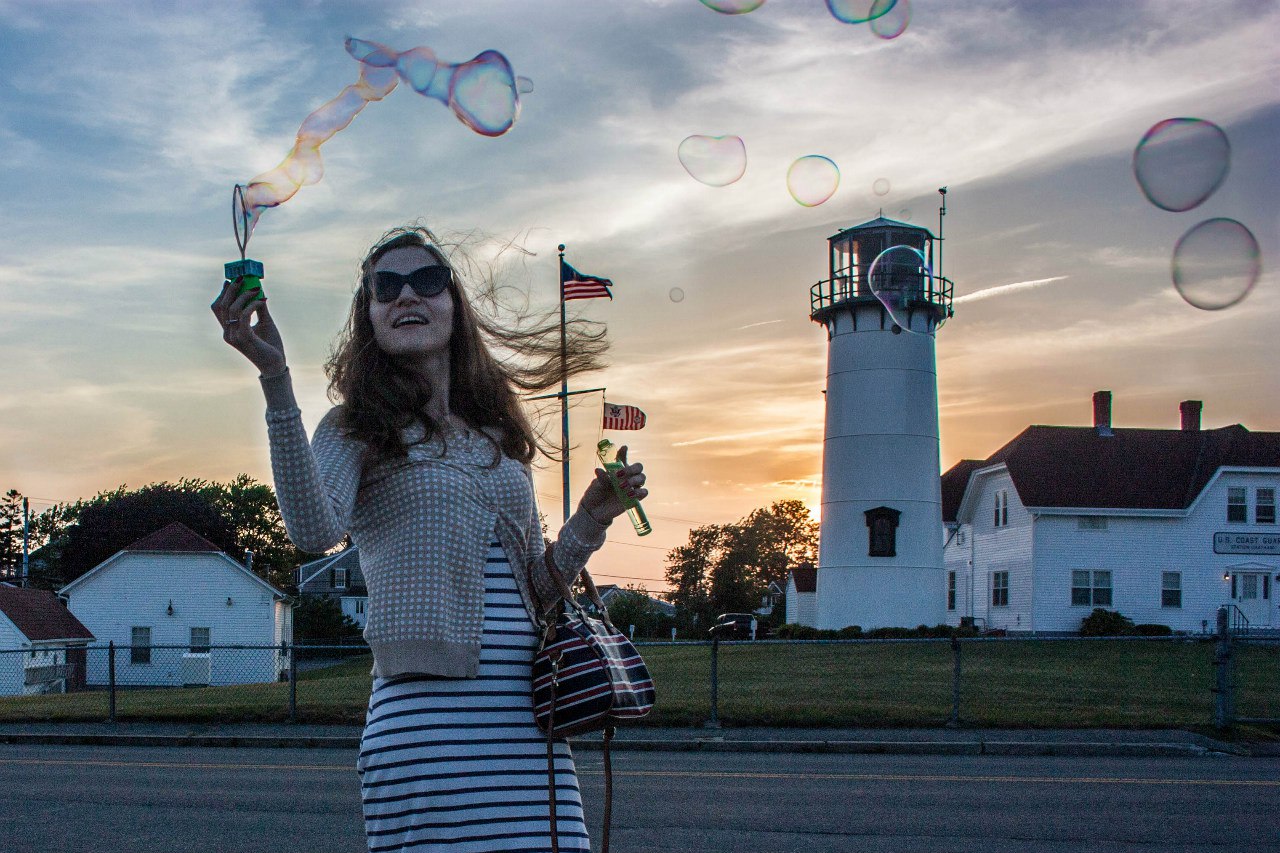 It was getting dark, so Hyannis Lighthouse was the last one we visited before leaving Cape Cod for Boston. For the good – I’ve always wanted to take a picture of a lighthouse against the starry skies! 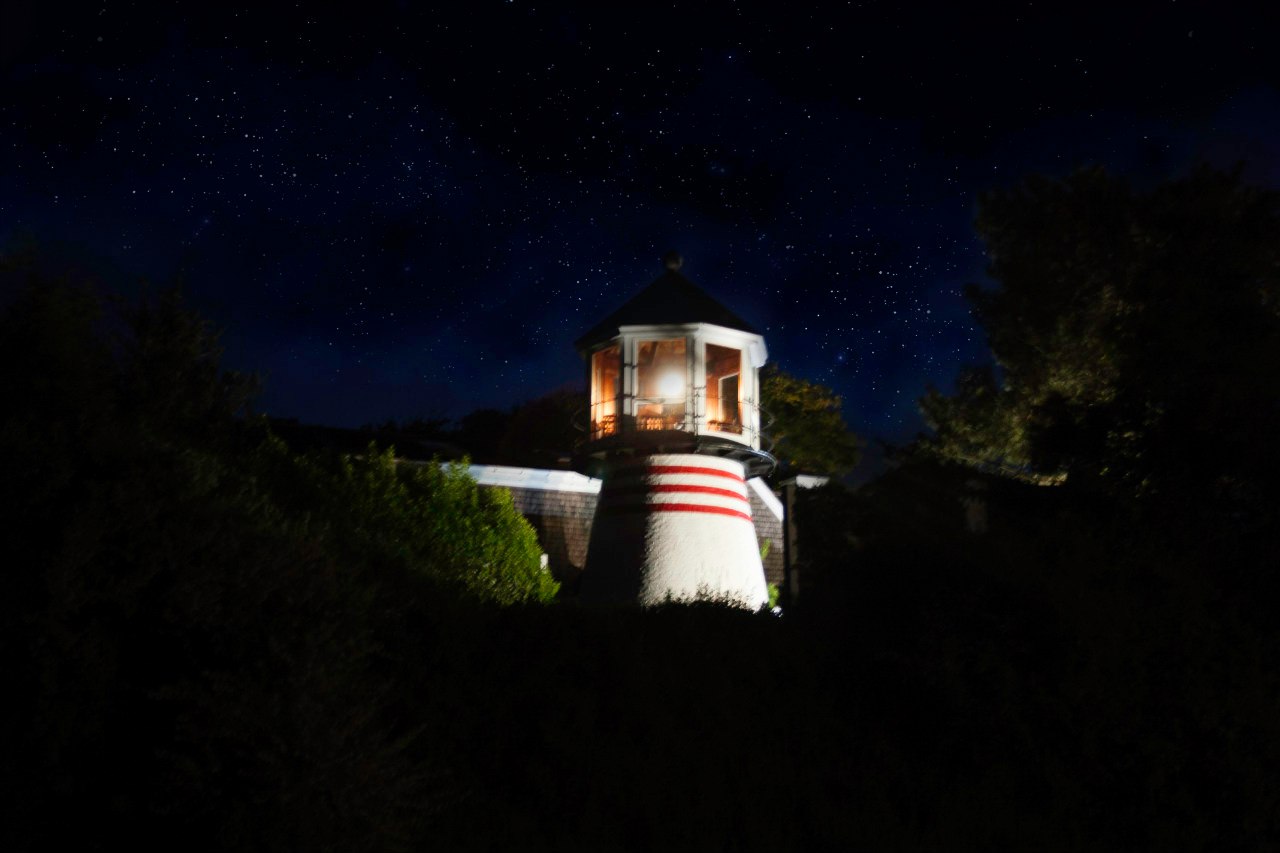 In Boston I was welcomed by Artur – an Ukranian postdoctoral associate in Harvard. Artur replied to my last minute couchsurfing request – what a surprise it was to meet him and learn that he is also a scientist! This opened for me one more laboratory and I have spent my morning getting acquainted with nano-microscopes in one of the cellars of Harvard. 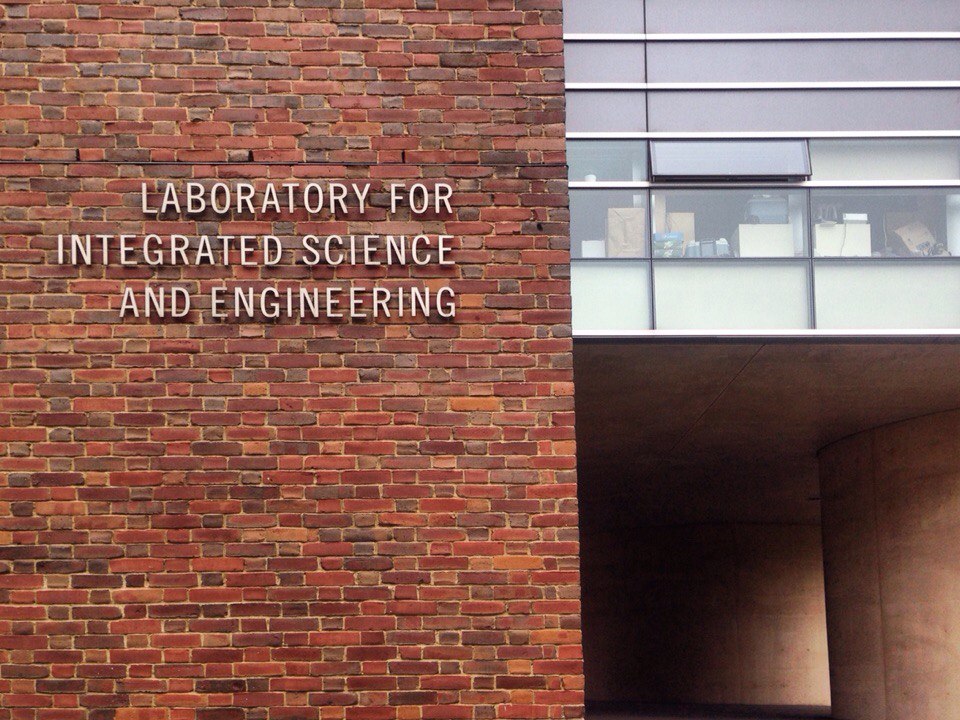 Artur gave us a free pass to the Museum of Science. Excited and curious like little kids we explored the museum. It was nice to see a Bike2Work installation on one of its walls – that’s a project I manage in Russia and even travel with one of our bags, which says “Bike to work” in Russian! 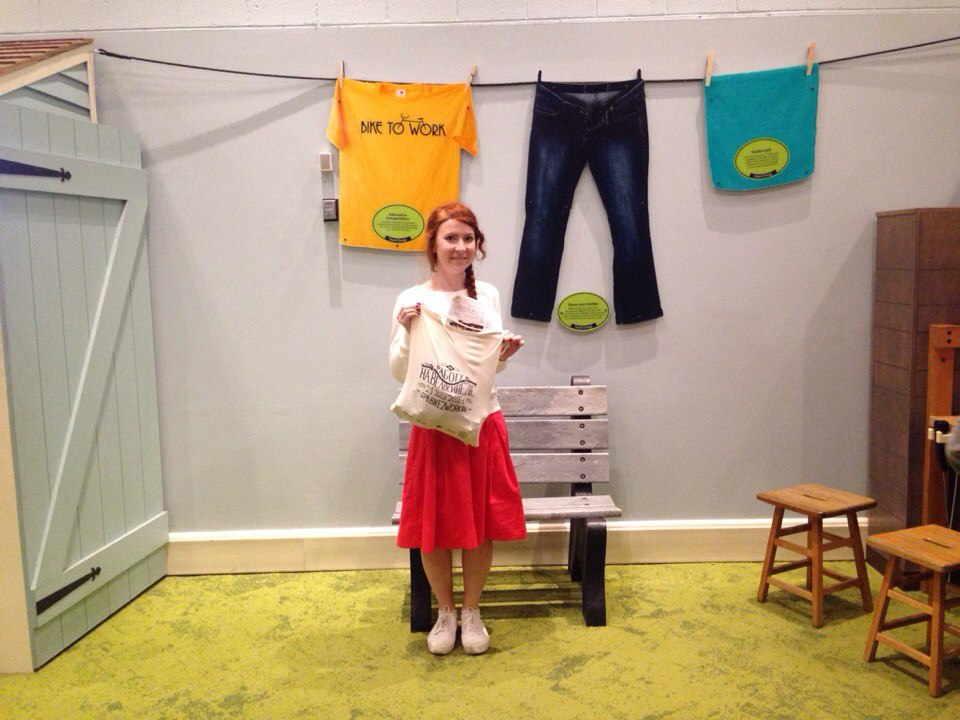 The motto of a good journey – “Try something new every day!” So we went to try some hot pot – an unusual asian meal. There was a pot with 2 kinds of boiling soup right on the table where we sat. We got a great choice of different raw ingredients: meat, veggies, mushrooms and spicy sauses. So we had a chance to cook them ourselves, leaving them in boiling broth for as long as it felt right for us. Delicious, healthy and cheap! 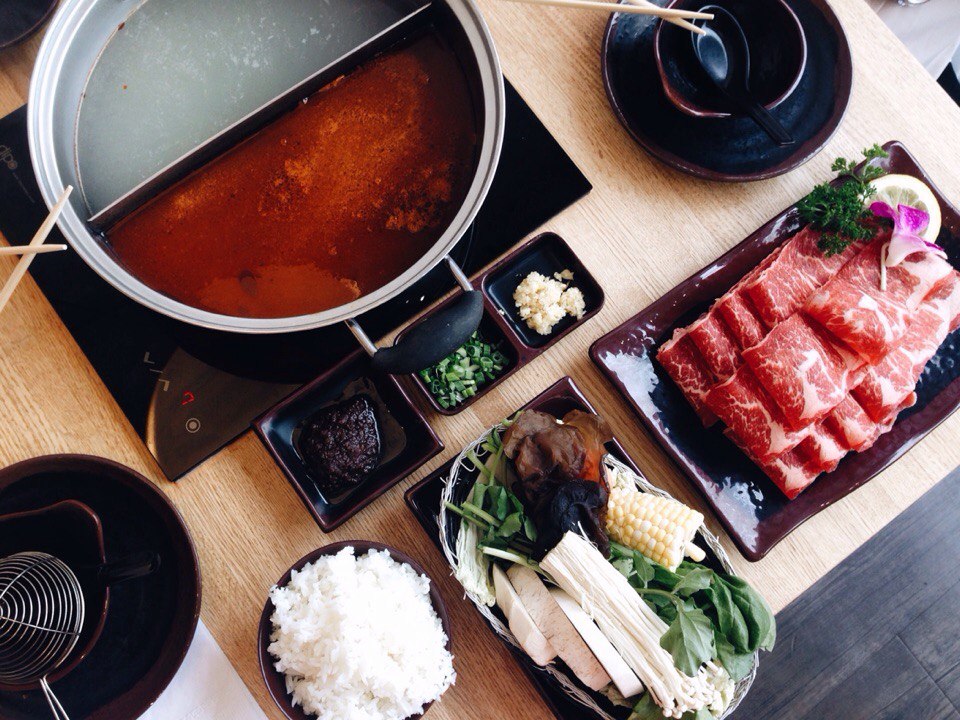 Boston is the most British of all American cities. English toponymes are everywhere: Worcester, Oxford street, even Harvard University is located in a town named Cambridge, and I have not seen so many Mini cars even in London. 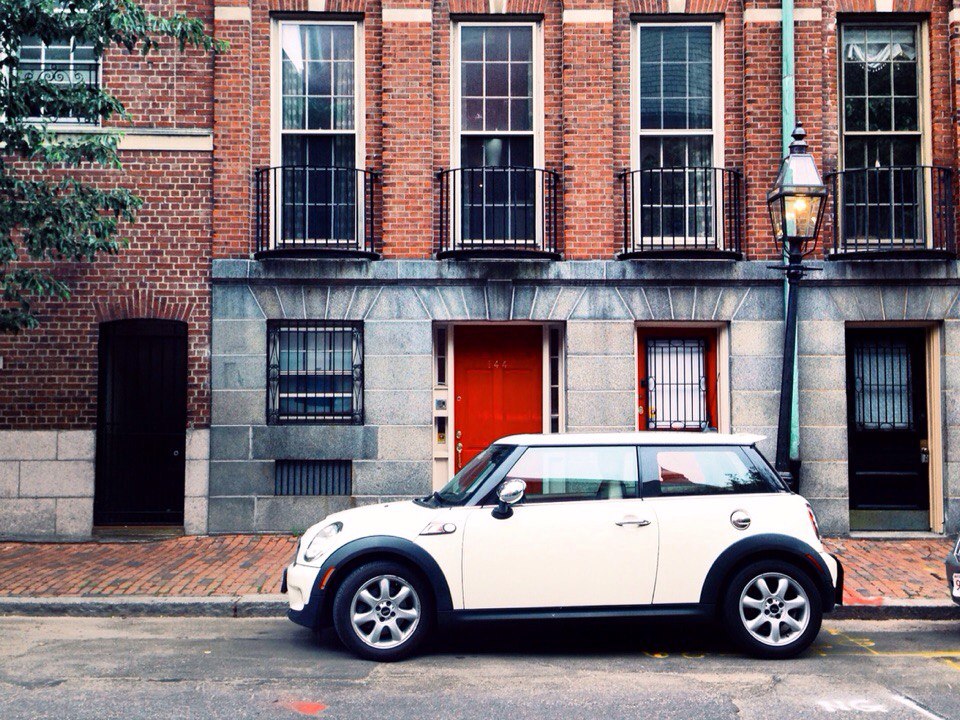 Look at these red brick houses on Beacon Hill – so Londony! No wonder I liked Boston ) 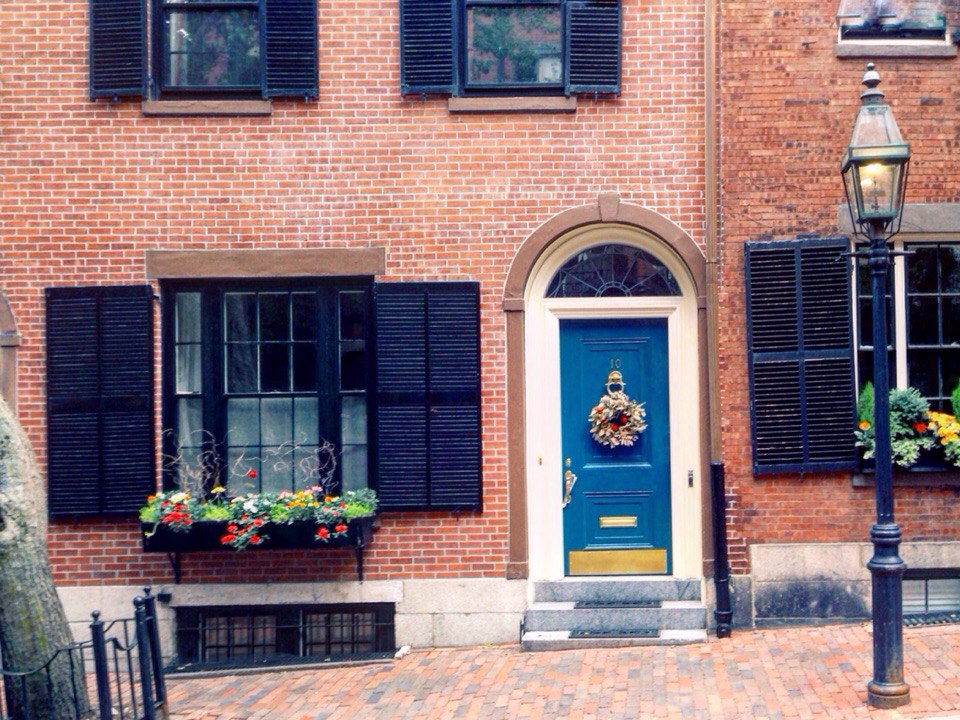 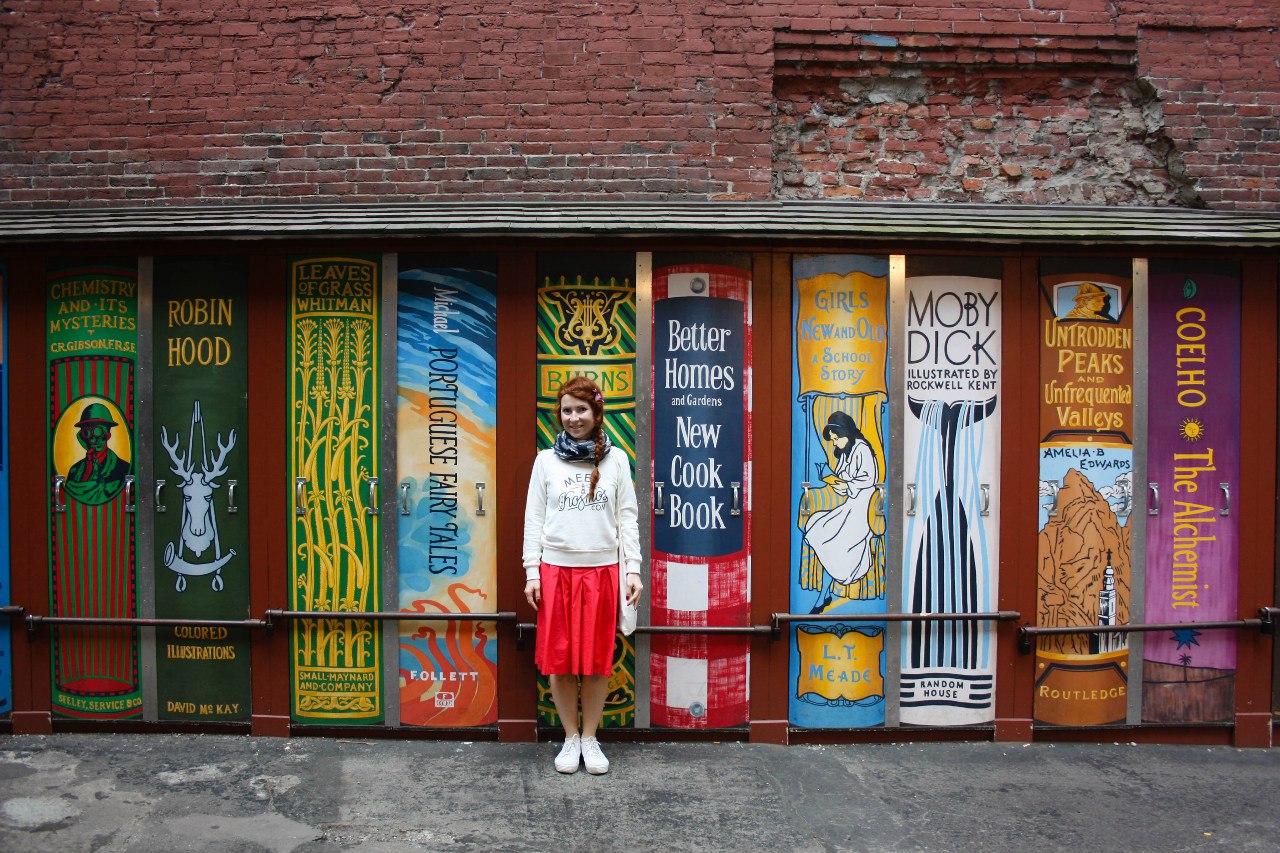 I love this little street scene: a kissing couple, a guy with a Brompton (I have the same bike!) and a small local coffeehouse. 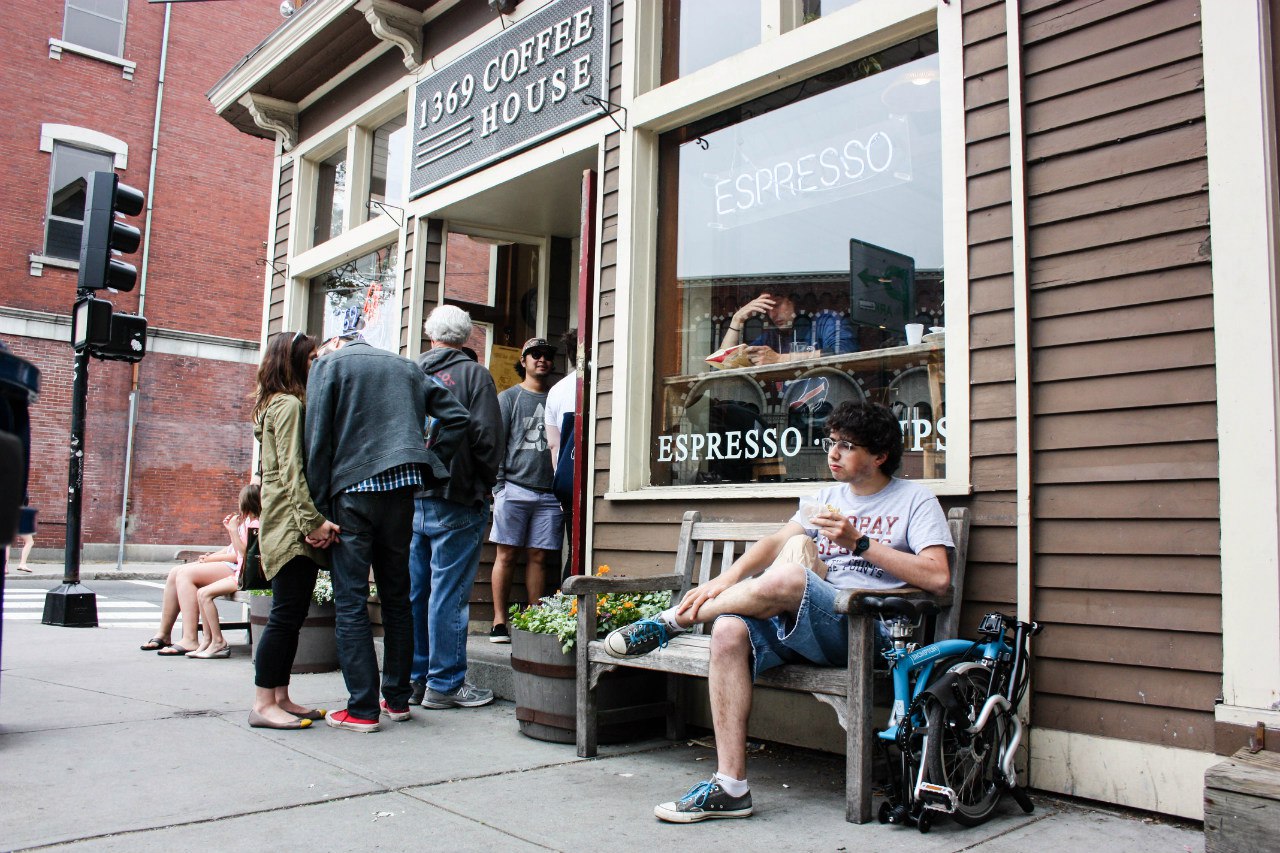 Nevertheless, New England doesn’t let you forget that you are in America. 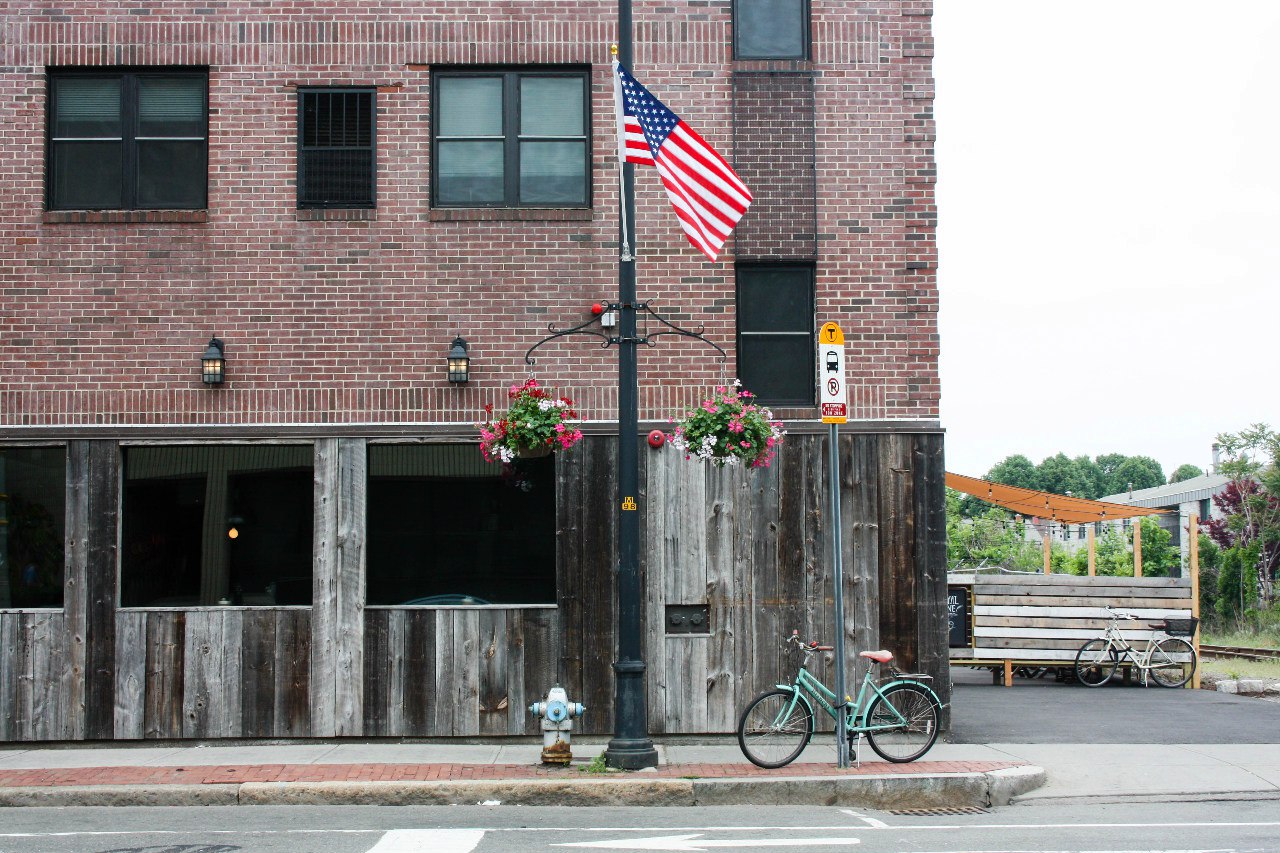 I was saying goodbye to New England and hitting the road to hitch hike the real America!

Here’s the 2nd part of my USA story - Hitch hiking and Biking.

For my Russian-speaking readers there’s a full story in an interview for Paper magazine and a video of my lecture about the trip.