from Boston to Niagara Falls and Chicago

In June, 2016 I hitch hiked the US from NYC to San Francicso. It took me 5 weeks and became my favorite trip of all times. I started a blog about my journey, but was too busy on my way to keep it going. All there is - 2 posts and some travel notes on Instagram. Here’s the 2nd post just to keep some memories of this epic adventure. You can read the beginning here.

“Catch a car with a dog,” said Masha, a big fan of dogs, when dropping me off at a rest area about 50 miles away from Boston.

And 10 minutes later I am going North with Randy and his dog Bobo.

“It’s illegal to hitch-hike in the state of New York” – says Randy. I say: “It’s ok, I will get a ride to Buffalo straight from Massachussets”.

And in a minute or so it happens.

Why did everyone tell me that hitch-hiking in the USA is more difficult than anywhere else? ) 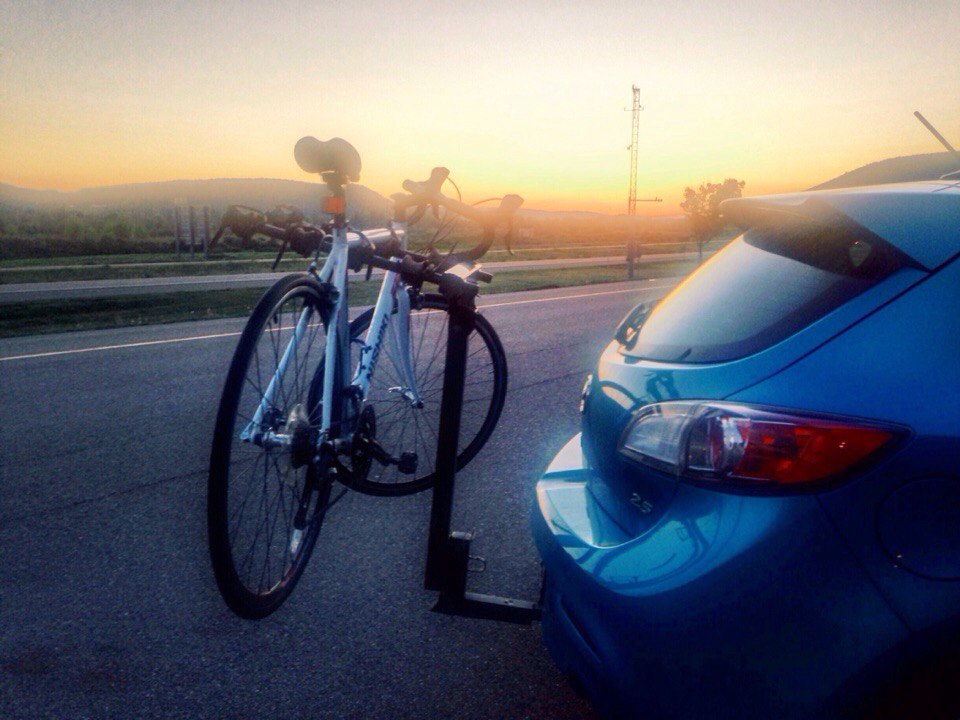 Randy dropped me at a rest stop, and I didn’t even have time to take out my sign saying “Buffalo” — another car stopped immediately.

– I need to go to Buffalo, can you give me a ride anywhere in that direction?

– I know where you are going. I won’t take you all the way there, but my friend will, – says the driver, whose name I later learned was Tanner.

I made a joke about the CIA, but the true story was the following:

Tanner’s friend Dave saw me on the road before I was picked up by my first car. He couldn’t give me a ride at the moment because he was going the opposite direction to get his car and wasn’t going to Buffalo until later. But he knew that Tanner was going my way.

So he called Tanner and asked him to take me to the spot where Dave could pick me up and drive me to Buffalo.

Tanner dialed Dave’s number on speakerphone and told him I was in the car. Dave’s voice was so happy – I felt like he was an old friend of mine, even though I had never even met him. I still remember this moment as one of the most warming on my trip so far. After hours of non-stop talking we arrived in Buffalo. Dave took me straight to the house of my host. Hitch-hiking magic in action! 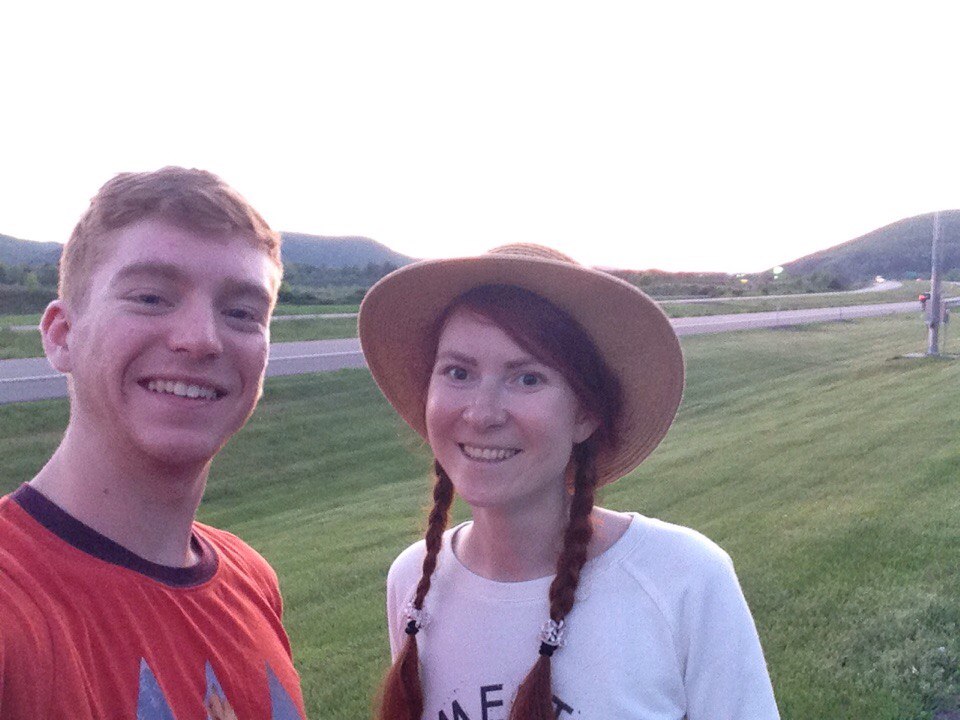 I stayed with 2 keen cyclists, Joe and Emmalee.

It was about 20 miles from their home to Niagara Falls, and I was eager to bike this distance. Quite a strange intention when you don’t have a bicycle!

From NYC I wrote letters to some of the local bike shops. One of them asked me to call, but I couldn’t do it because I didn’t have an American sim card. So I decided to go straight there and see what happened.

When I entered the shop I was greeted by the words “Are you from Russia? Then give me a hug!”

That was Dick, owner of “Dick’s Bicycle shop” and “Grandfather of Bicycles”. 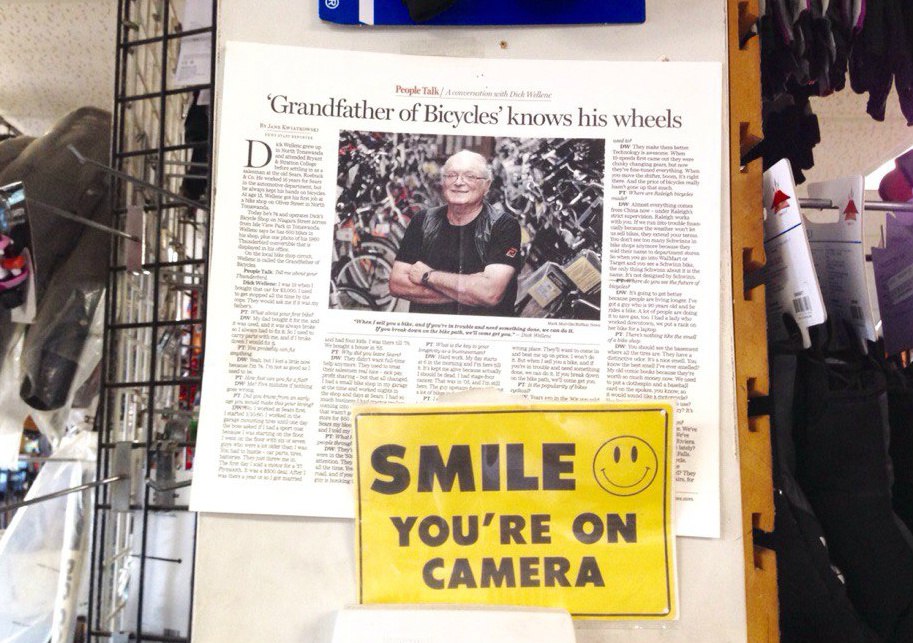 He and his crew were the nicest people. I couldn’t even imagine that along with the bike I would get an “all inclusive” package: cold water, coffee, food and the warmest welcome. 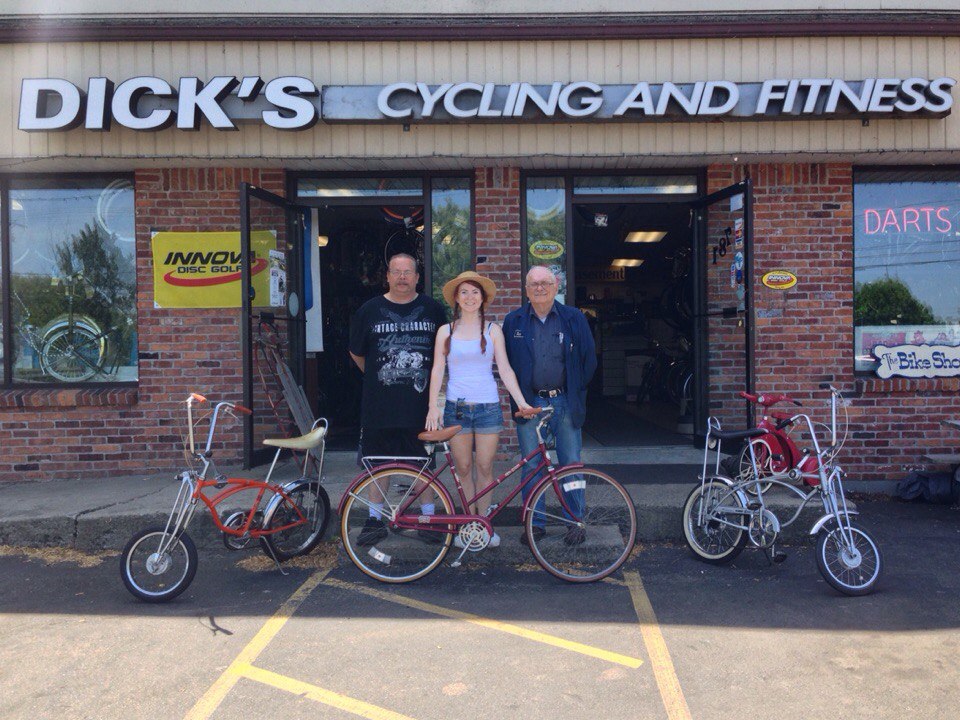 This nice, old-fashioned beauty brought me almost all the way to Canada. It was pretty much like the one I used to ride at home back then. 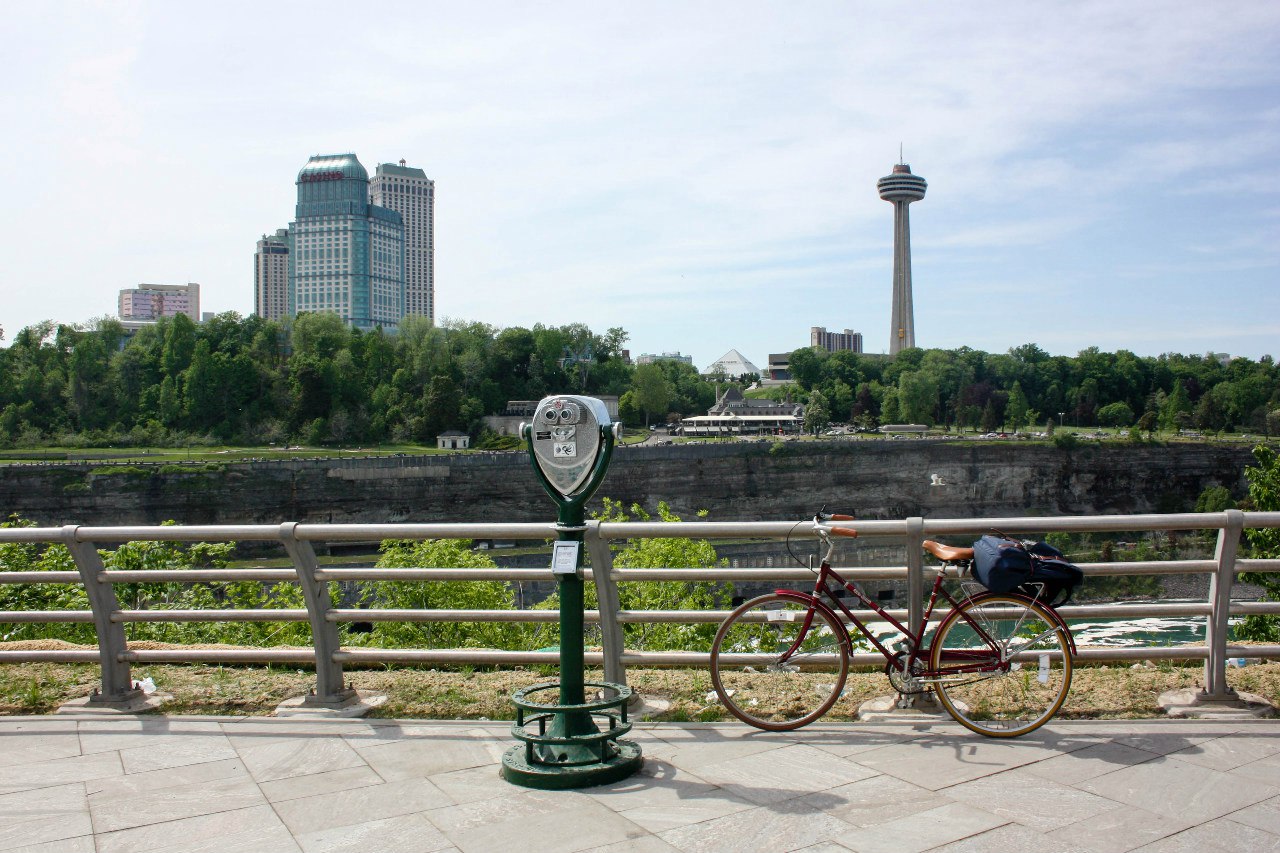 The road to the Falls from Buffalo is not always nice, even though it goes along the river.

But I have met a lighthouse on my way! Don’t know its name though. 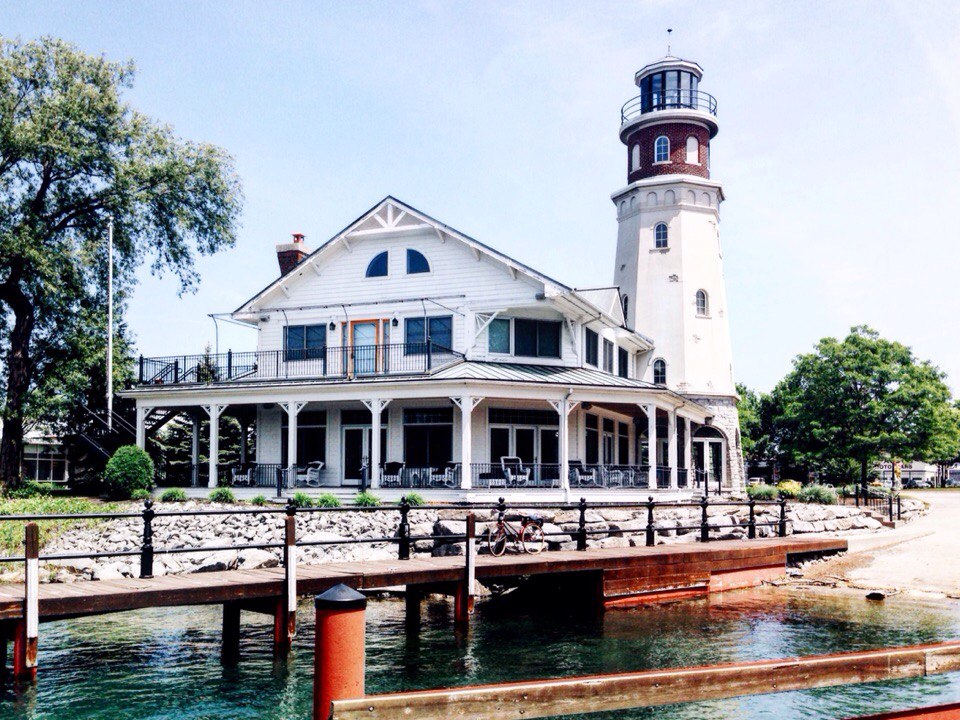 Once you approach the waterfalls, you see a cloud of mist rising up to the sky. 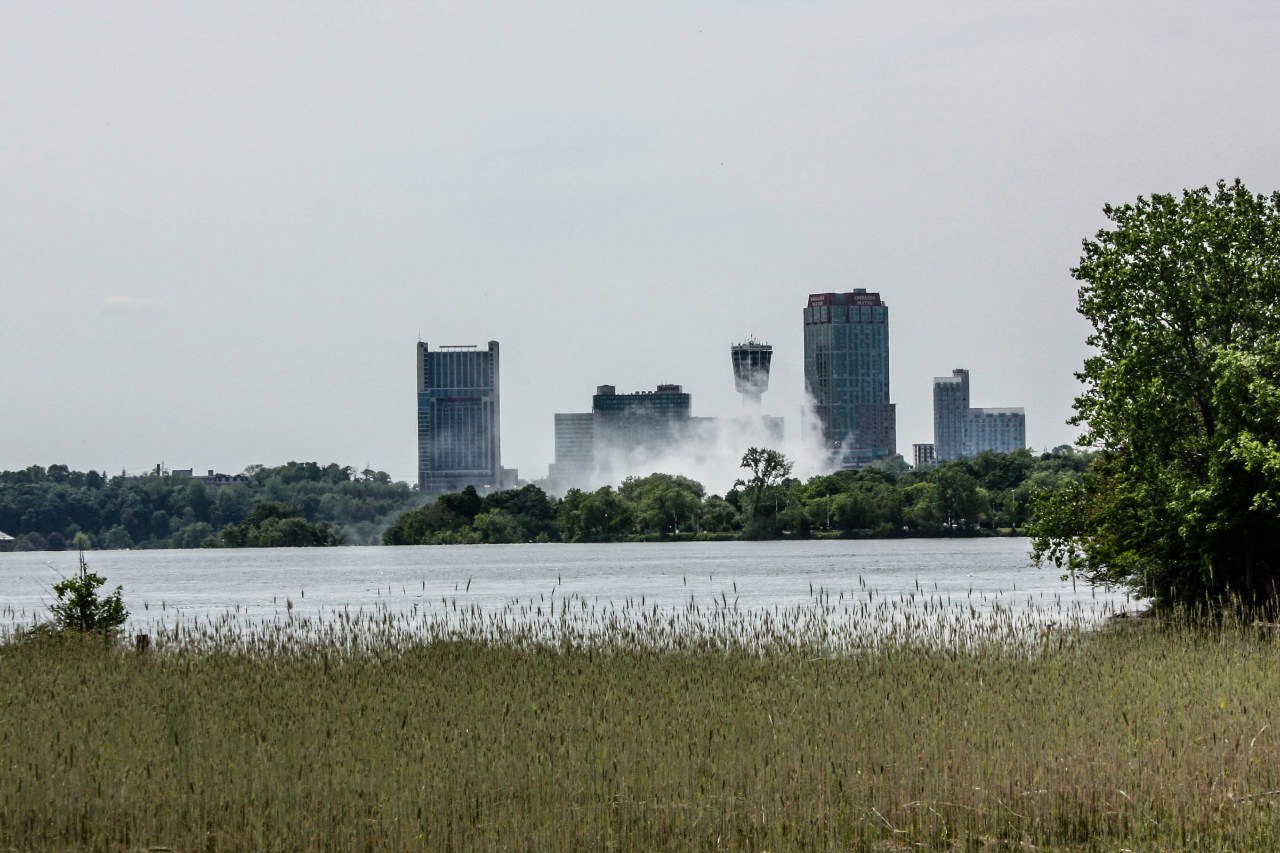 But once you come to the observation spots you mostly stay dry and safe. 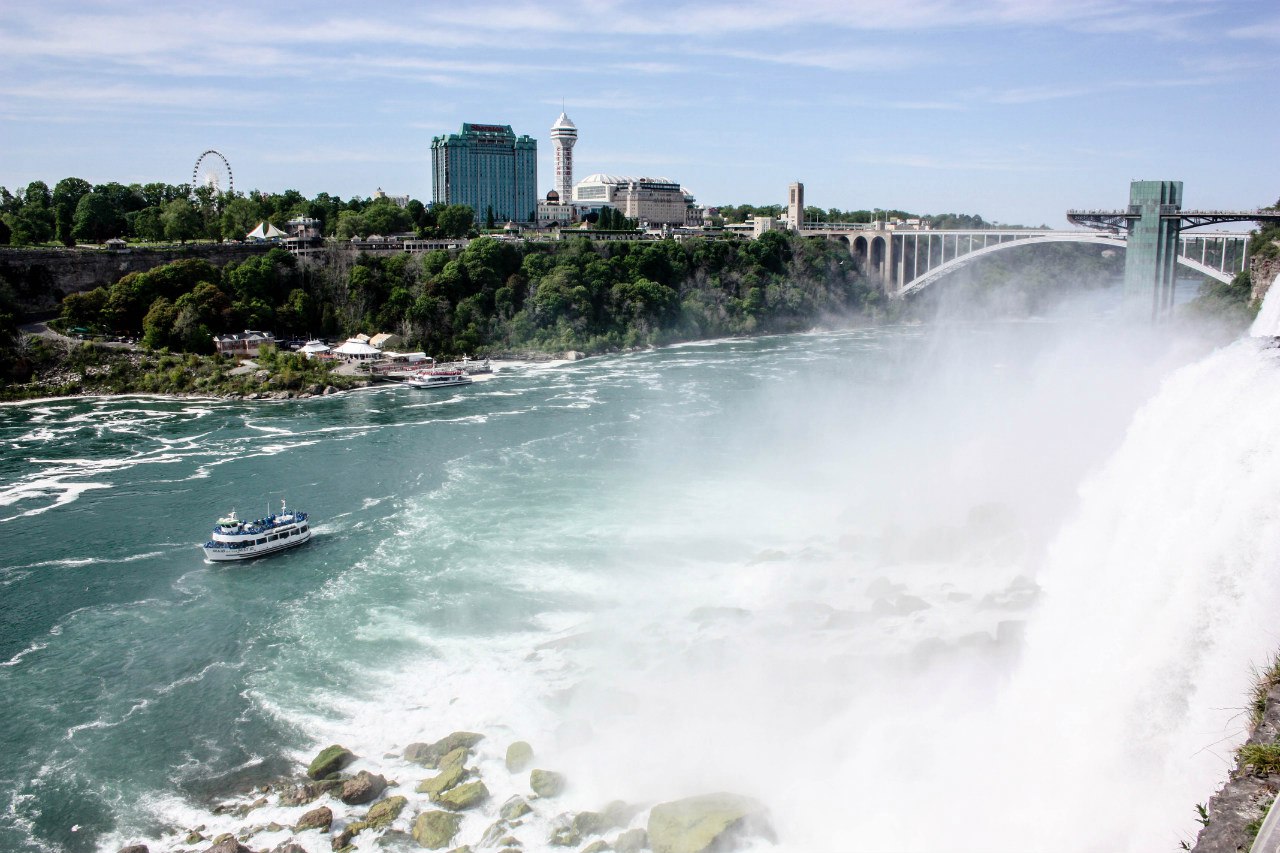 Unless you decide to take a boat tour. Still there’s no need to take an umbrella – you will be given waterproof ponchos, all the same color. 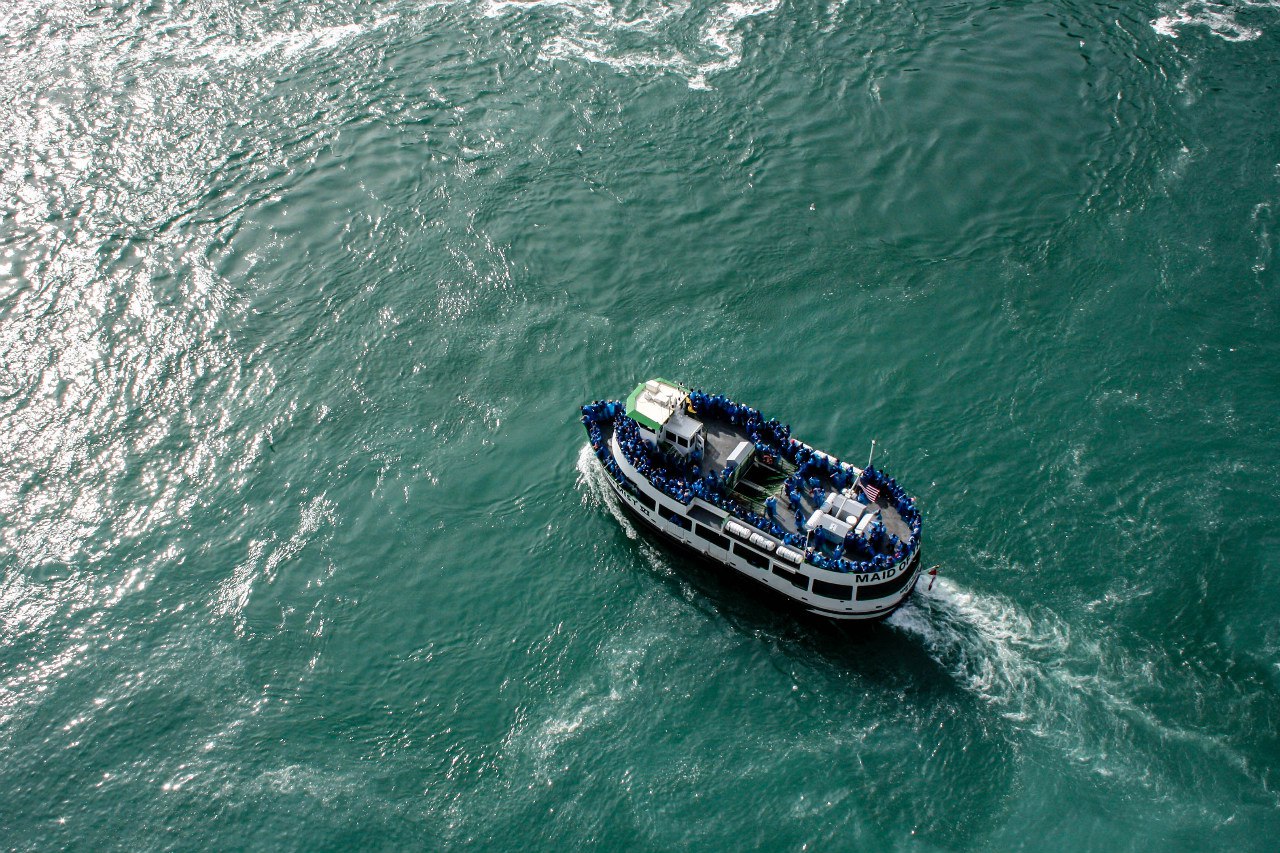 After exploring nameless wild waterfalls of Iceland, Niagara Falls didn’t impress me that much. But nice people, many hours of biking, beautiful destinations, mist and sunshine made this day very special. 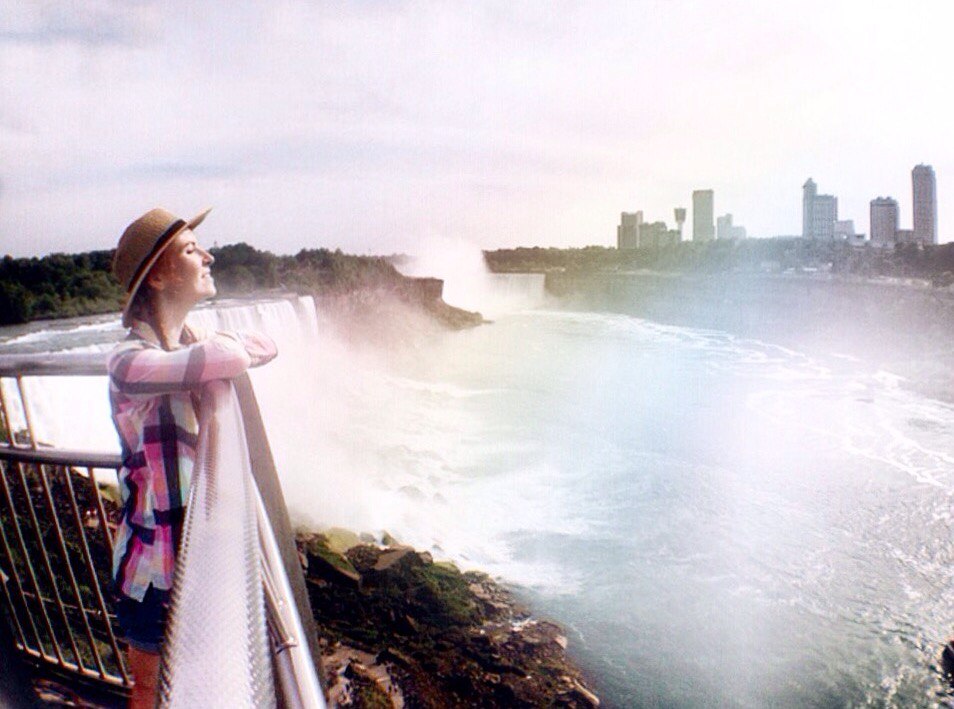 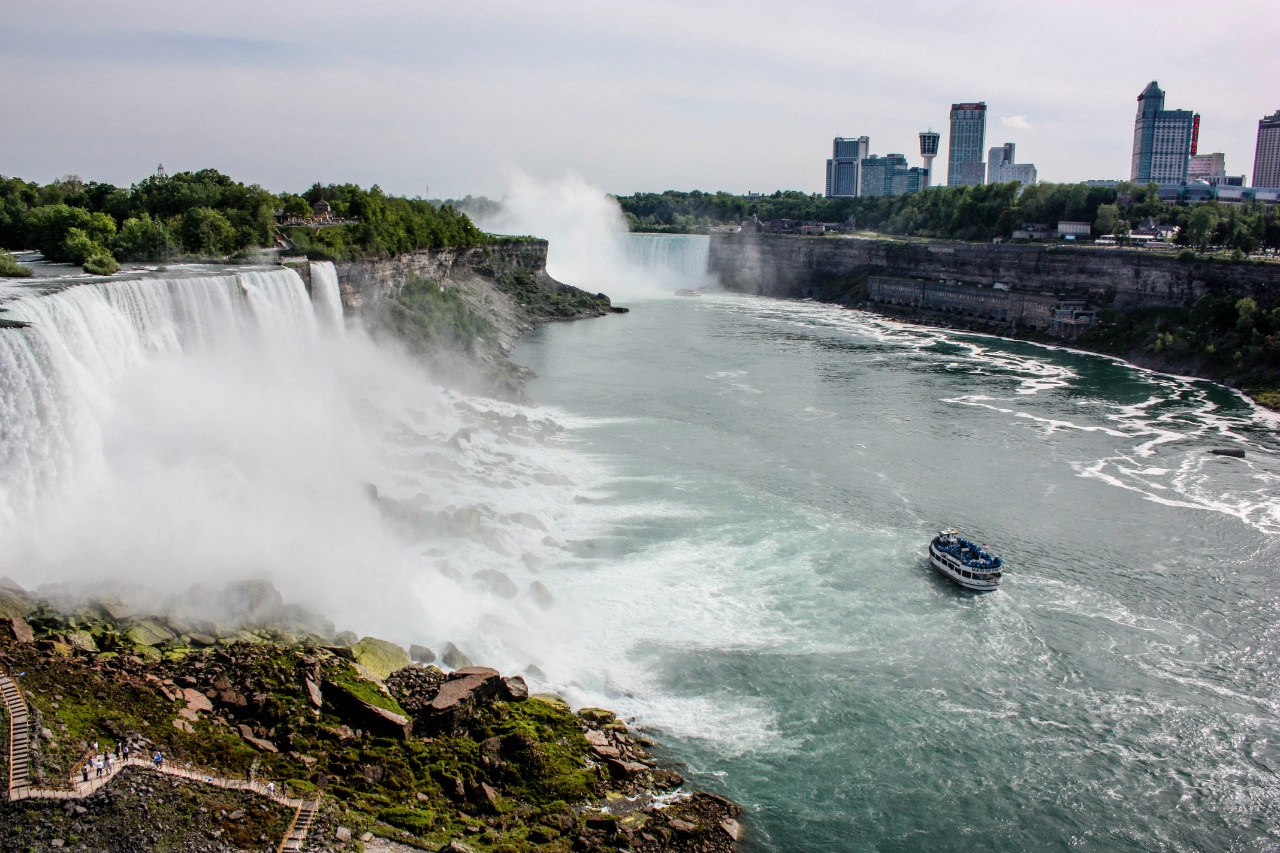 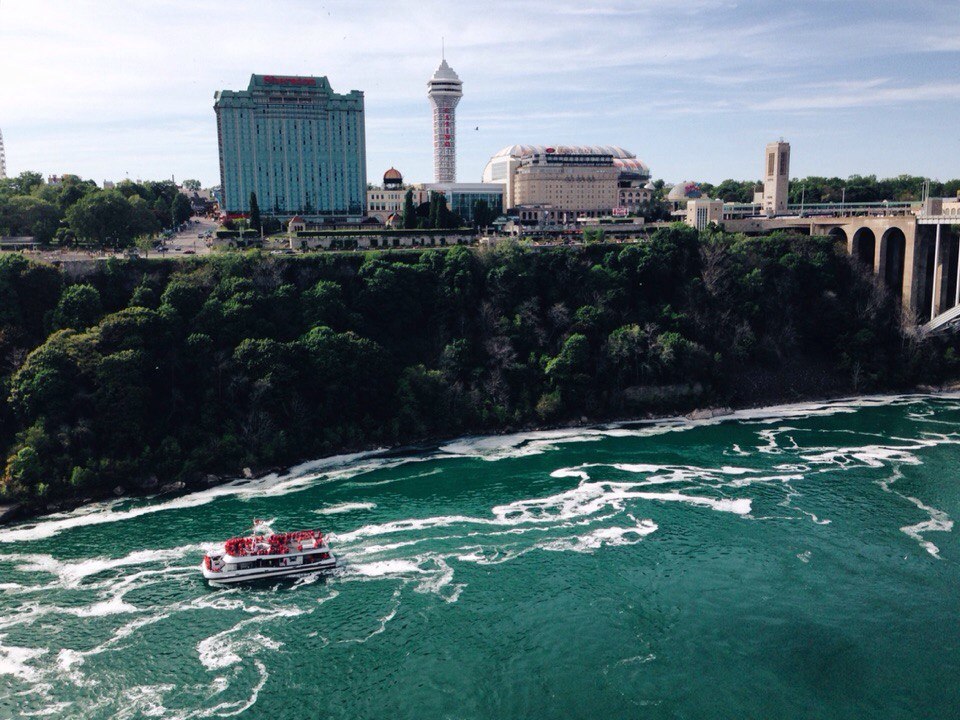 There are a few lighthouses in Buffalo, but I had time to visit only one. I picked the one on the Grand Island – Grand Island Front Range Lighthouse. 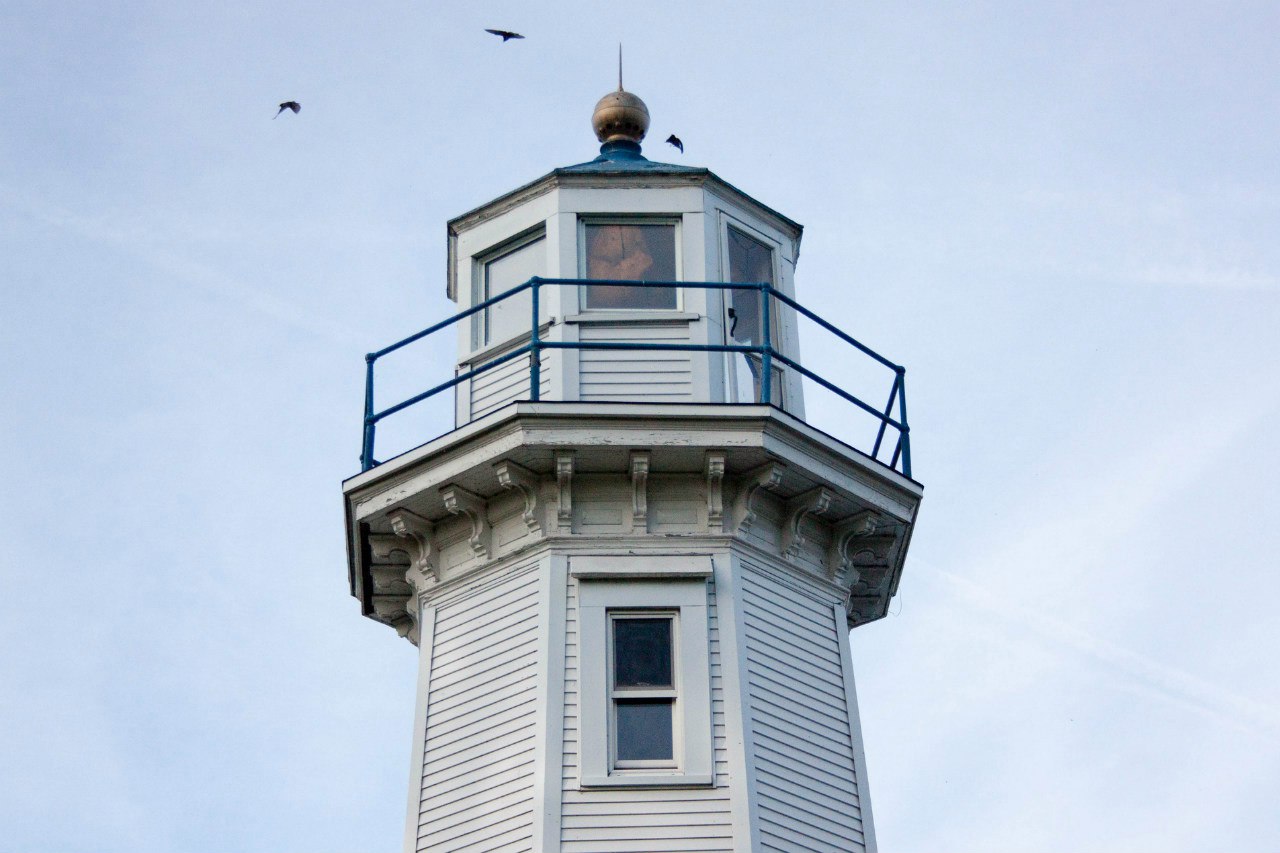 It stands on the territory of the Buffalo Launch Club and is surrounded by yachts, which makes it amazingly photogenic! I couldn’t stop taking pictures of it and enjoying the sunset. 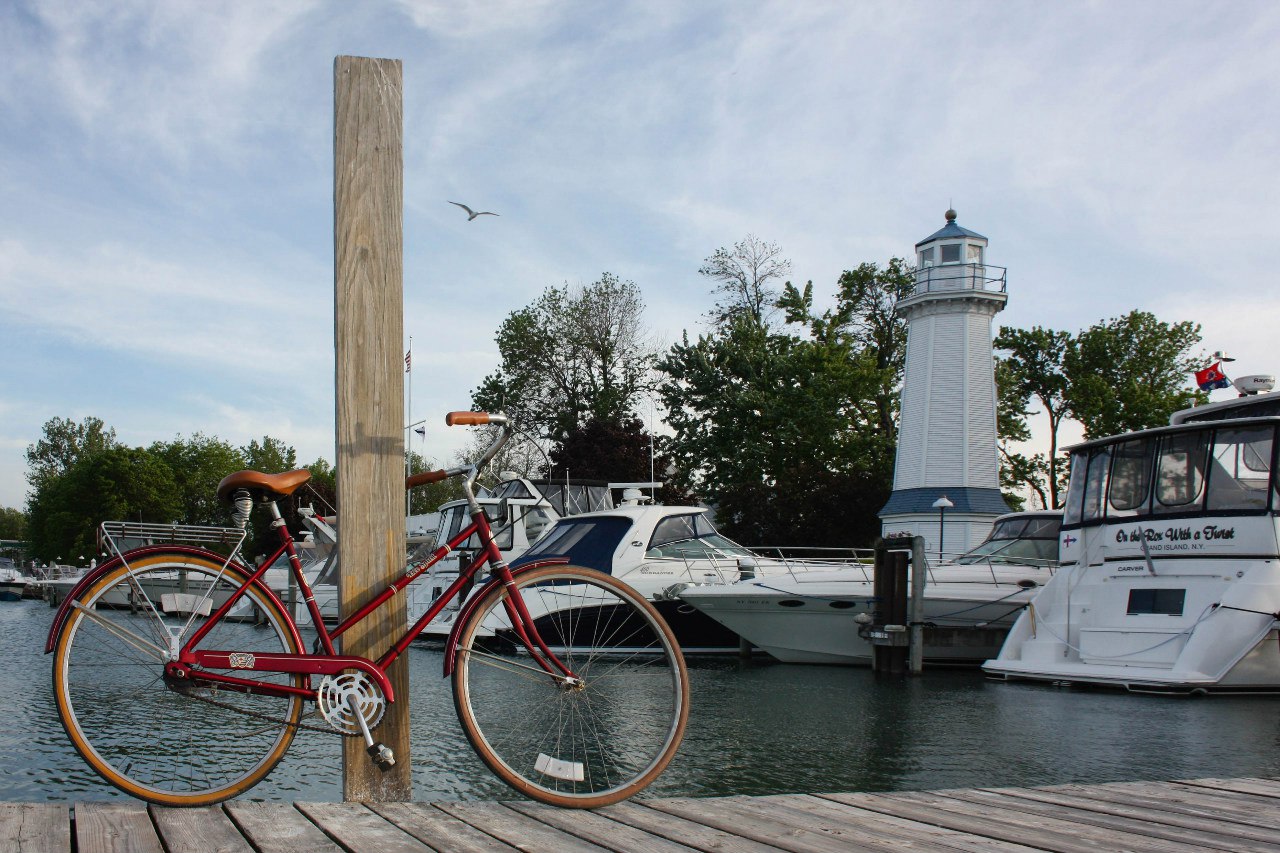 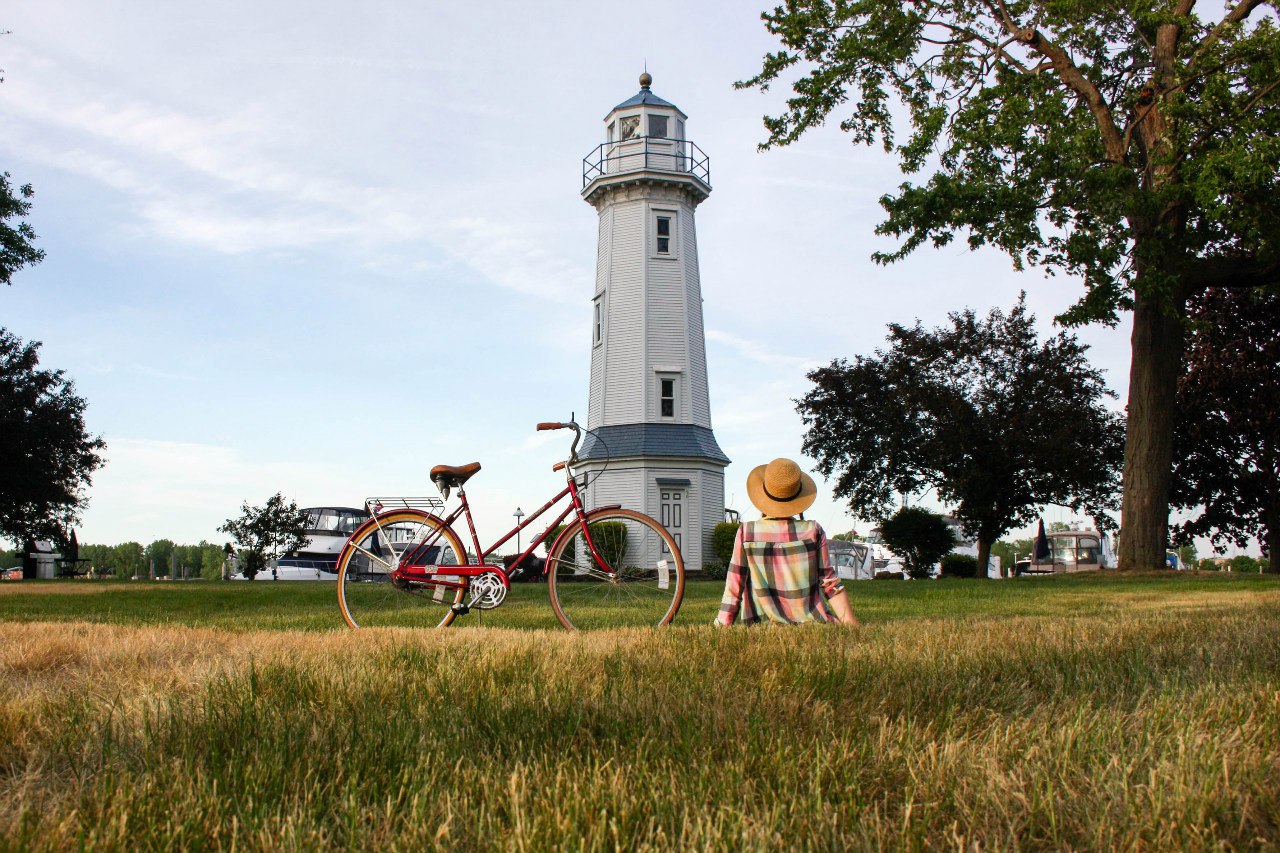 The next day I got up very early to start my trip to Cleveland.

The most difficult part of hitch hiking is getting out of the city. I rode a bus for almost an hour from my place to the most southern part of Buffalo, and I still wasn’t even on the road. Walking to the nearest gas station I hadn’t even lifted my thumb. But suddently one car stopped and took me to the road where I needed to go. The next driver shared his bagel and coffee with me – that was the only breakfast I had had all morning.

Then I met Dan. Dan drove a fantastic Oldsmobile! 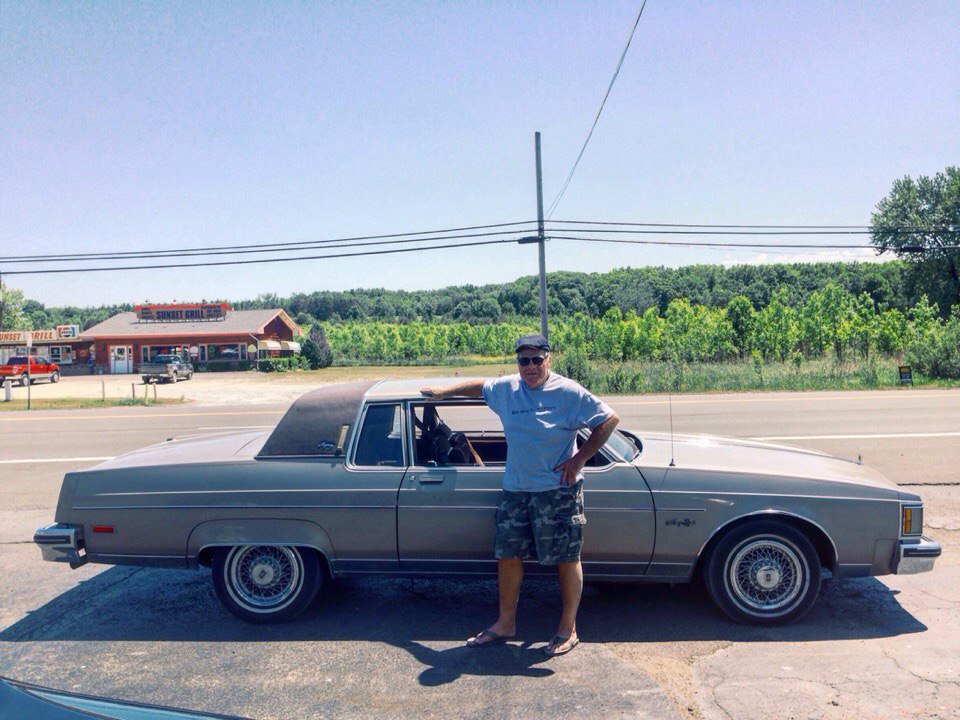 We had a very nice chat, and then Dan insisted on taking me to the beach restaurant to buy me some real lunch. He worked at that place when he was young and told me a lot about the great parties they had there. I should start putting down my conversations with the people I meet – every time a hear a great story I think “oh, I need to share this on the blog!” but then it just gets lost in the caleidoscope of events.

As we were having lunch we watched people bathing in the lake, girls walking around in bright bikinis and guys playing beach volleyball. 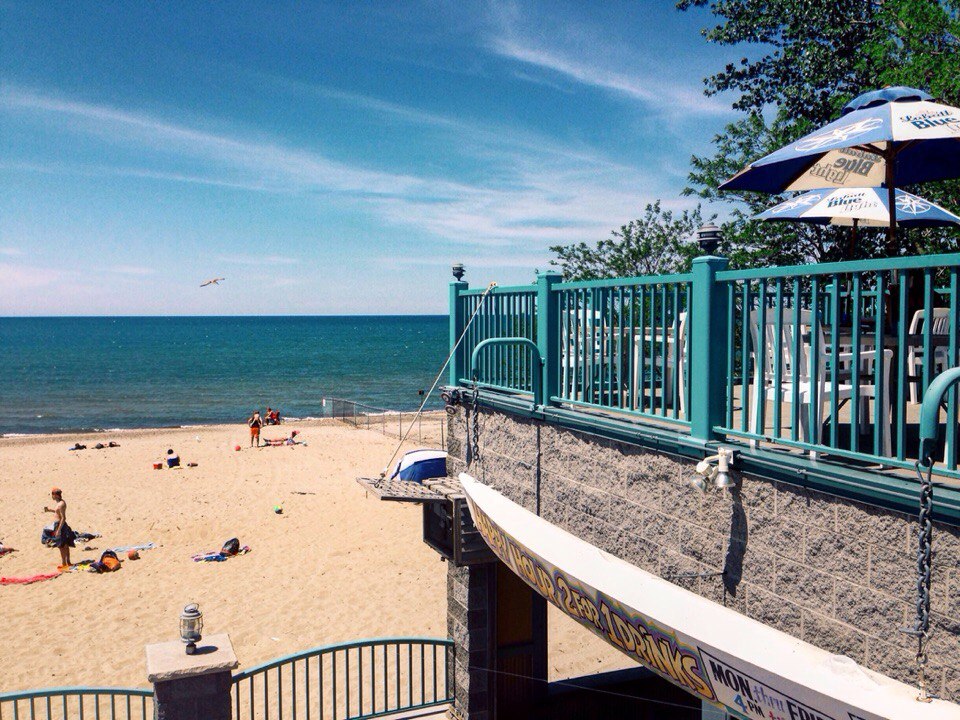 I was happy I decided not to go by the interstate, but that I had chosen route 5, which runs along the lakeshore. Lake Erie was accompanying me the whole way, sending bright blue flashes to the open car windows. 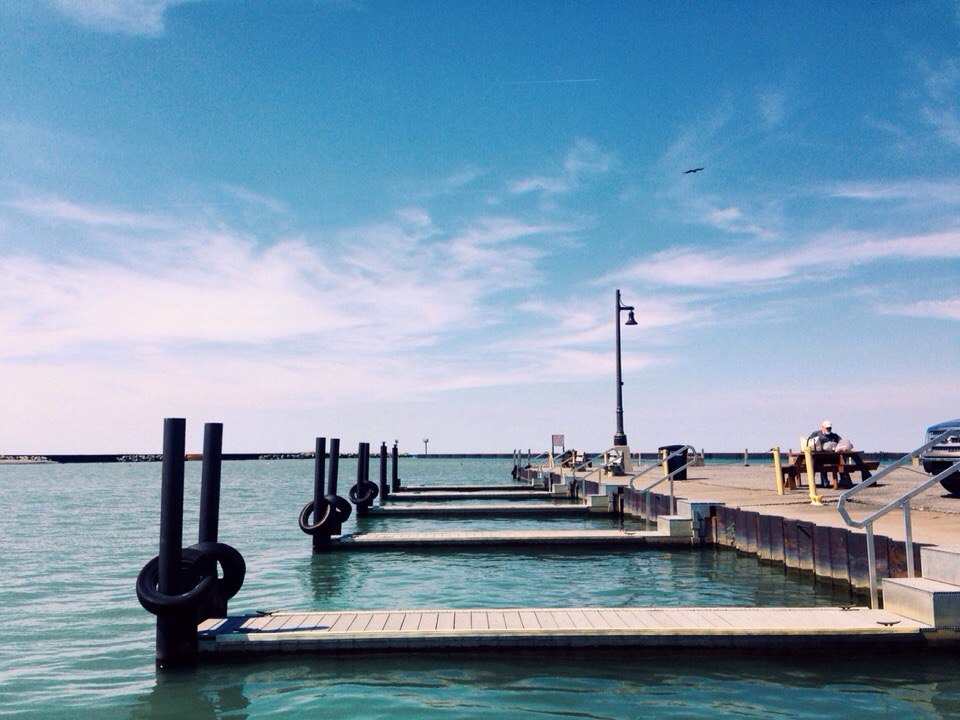 I also hoped that keeping to route 5 would let me see some of the lighthouses on Erie.

And I did! Because my next driver Steve was so kind to take me to 2 of them, even though they were not on his way home. We took a couple of pleasant walks together.

The first one was to the Dunkirk lighthouse. Unfortunately it was closed that day. But I am good at taking pics of lighthouses through fences, as all of them in Russia are always closed to the public. 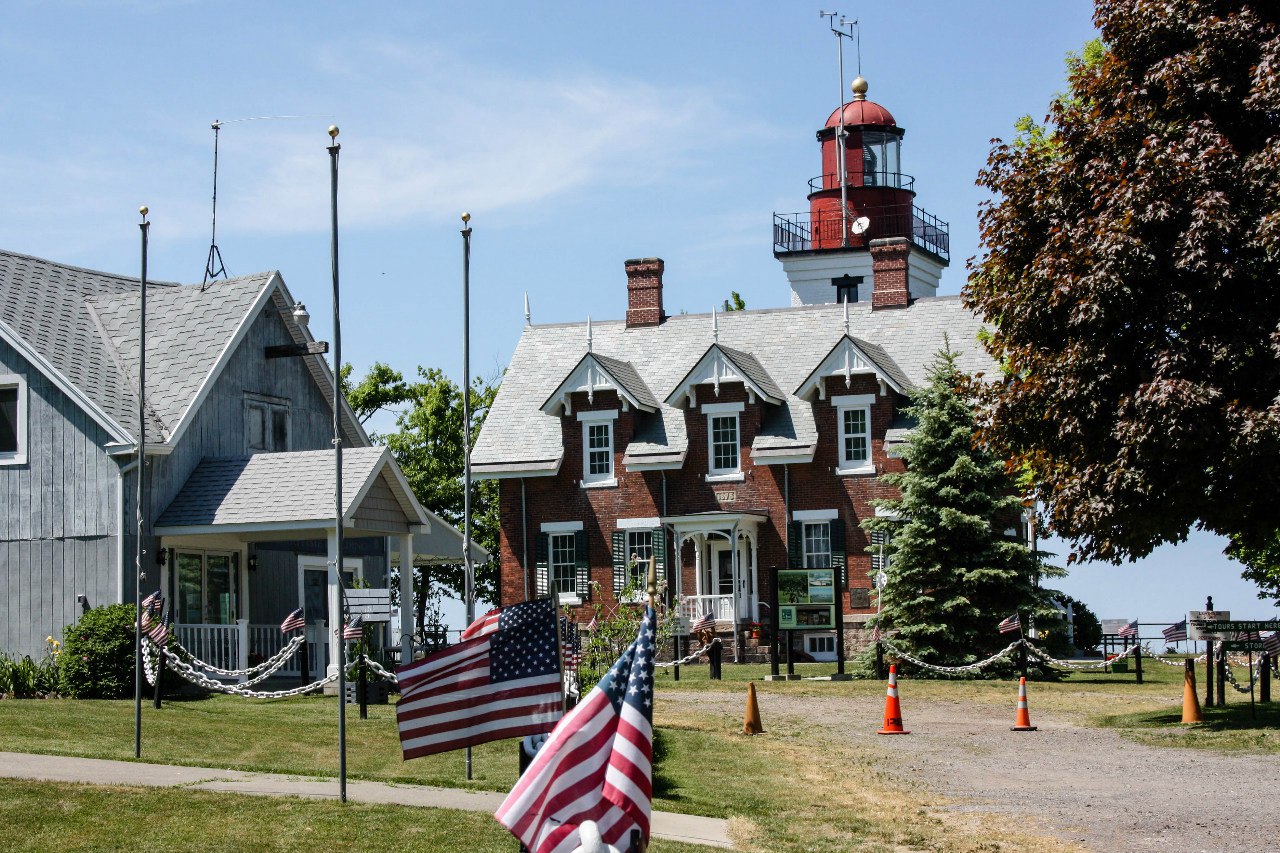 Nearby there’s a small Buffalo South Entrance North Side lighhouset, which looks like a cosmic capsule – what a cutie! 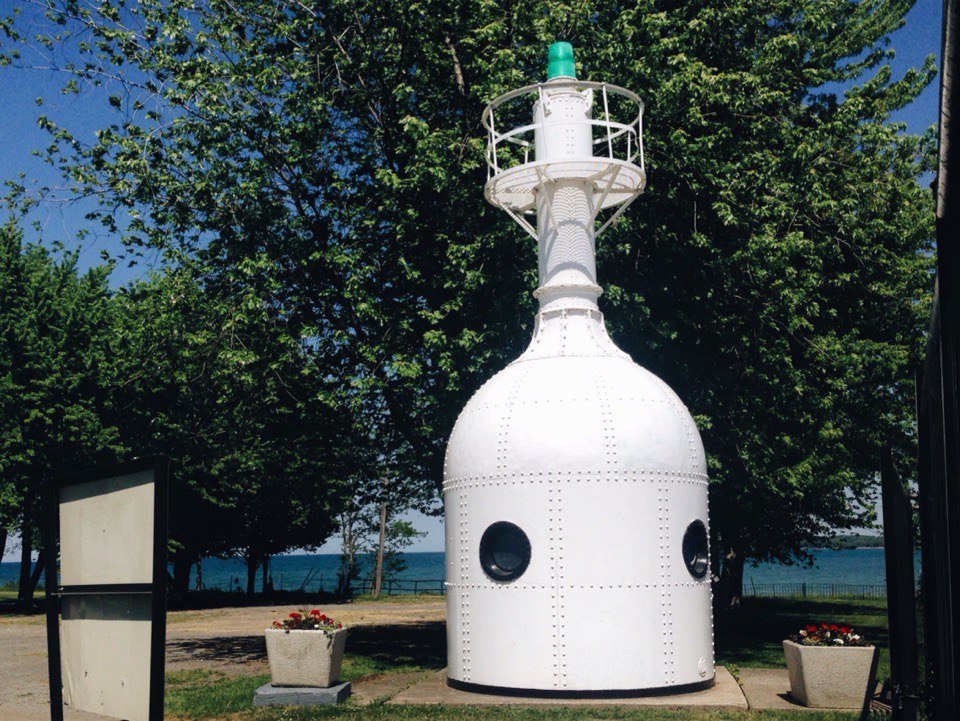 The next one we visited was an old lighthouse with a Spanish name, Barcelona Light. 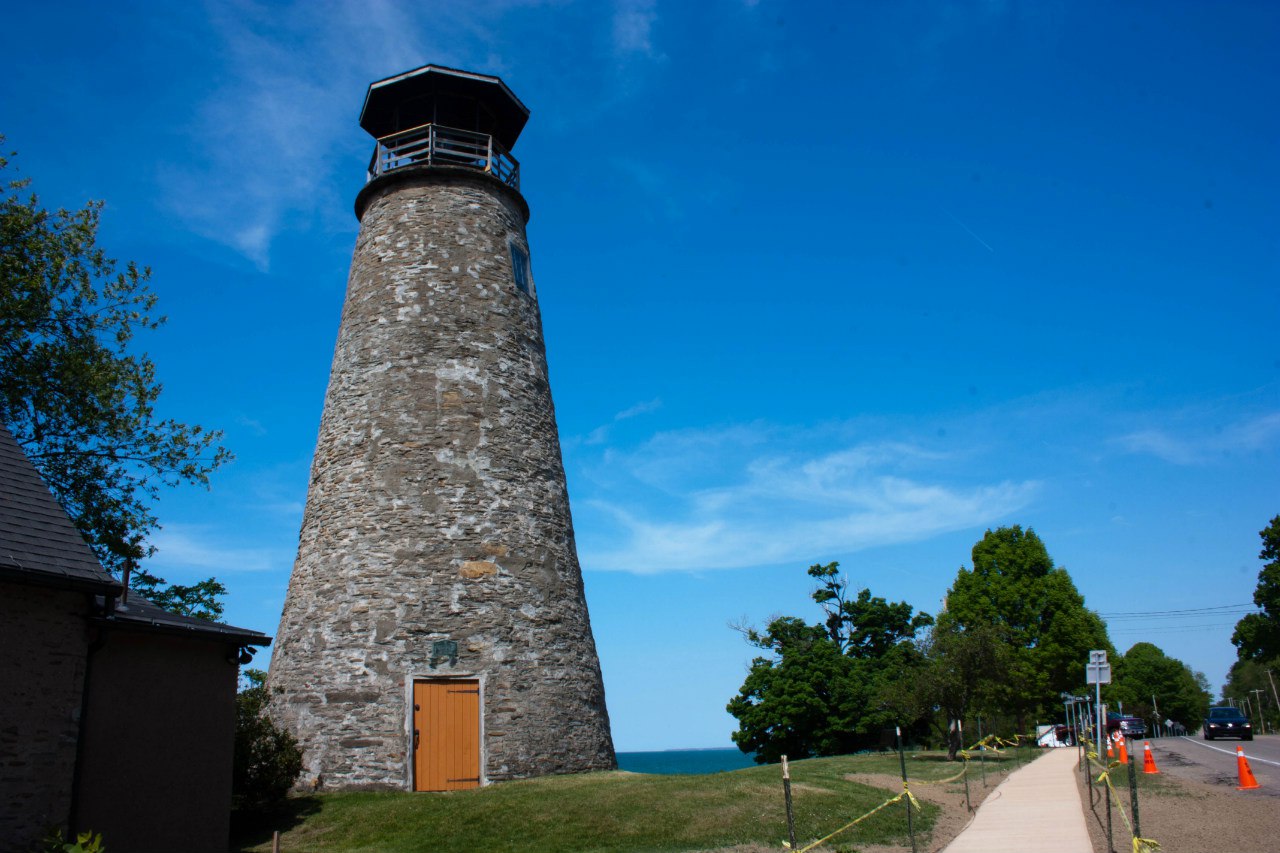 The surroundings also had a Spanish feel – so bright and blue! 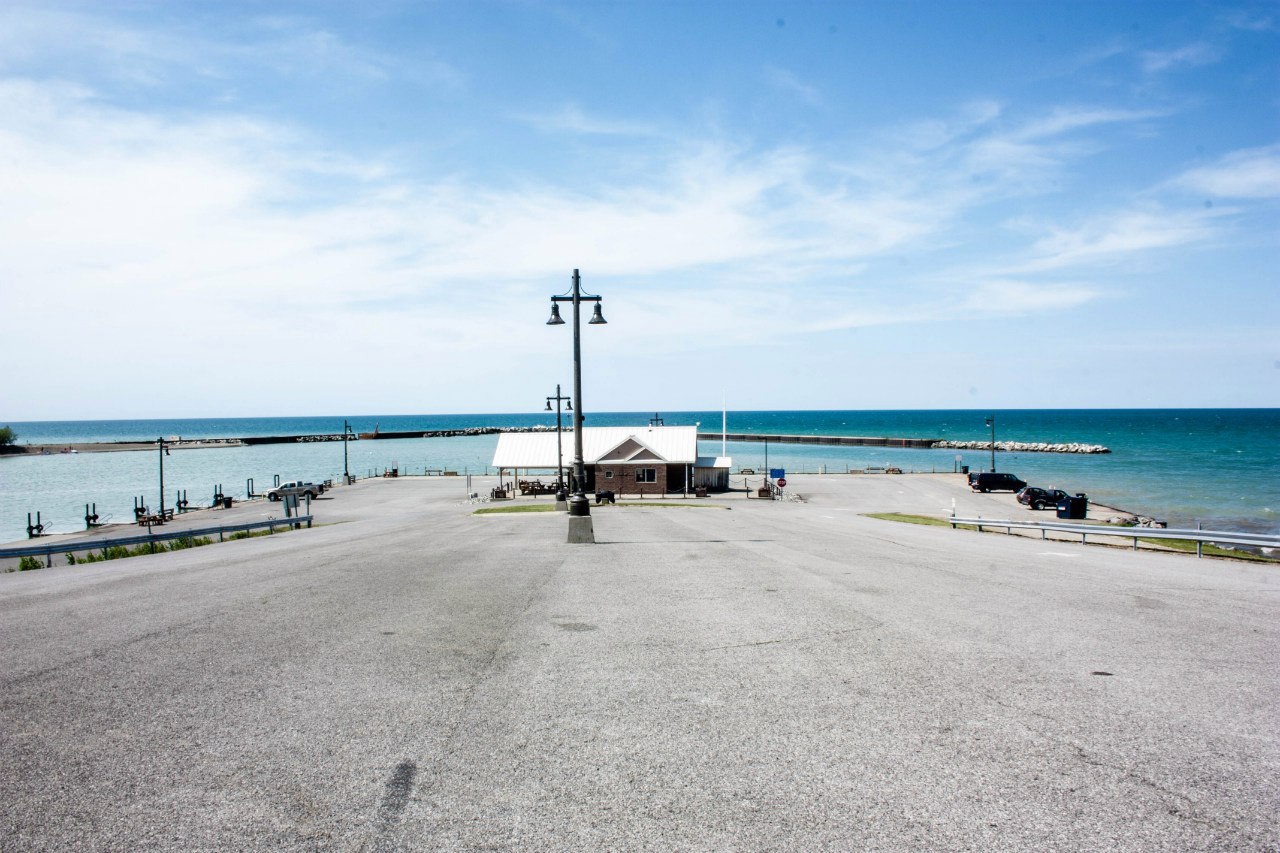 When his big truck stopped almost at the foot of the lighthouse I didn’t know that we would become friends for the next two days. I didn’t know that I would cancel my couch in Cleveland to go with George all the way to Indianapolis, have a great dinner with him at Applebee’s and sleep in his truck. I just thought that this big blue-eyed guy was a very nice person for sure. 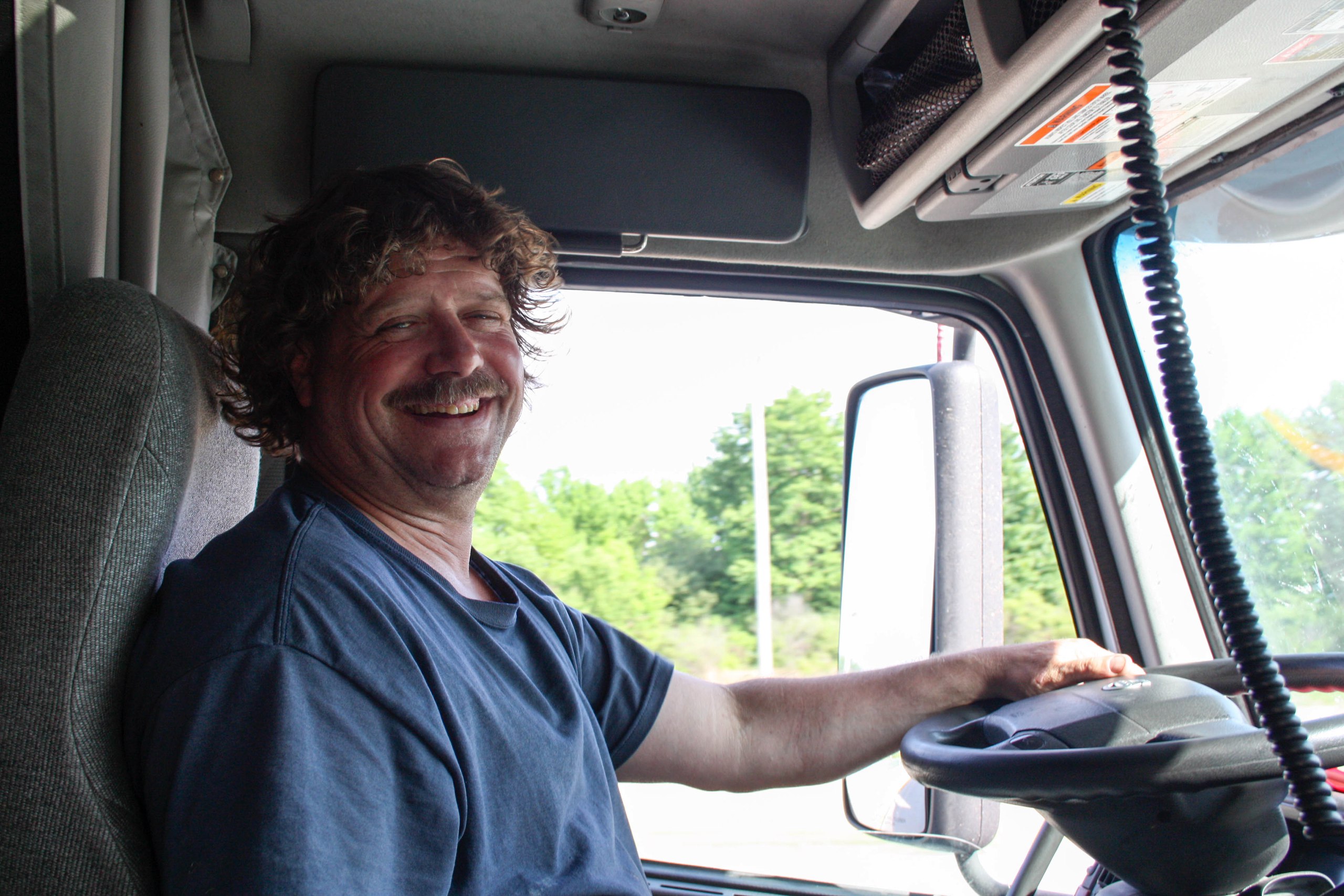 I had a comfy night in his truck, and in the morning I saw a bunch of comments on Facebook and Instagram, warning me to remember all the bad stories about hitch hikers and truck drivers.

It is important to say, that my experience is not about leaving your brain at home and traveling with strangers. It’s about judging a person by his or her personality- not by stereotypes of this person being a truck driver (or black or Russian or a redhead… I could go on with this list forever). I made a decision to spend the night in George’s truck only after I talked to him for an hour and understood that he is completely trustworthy. I had a place to stay in Cleveland – it was my decision to cancel it to get this new experience. I also took a picture of his truck number and sent it to a friend. My brain is a little overwhelmed with all the awesome experiences during this trip, but it is still working. Some fearless blonde girlfriends of mine are traveling to Dagestan and Iran, and I sleep in the truck and hitch-hike the States, to show that the world is much larger than where stereotypes can reach. 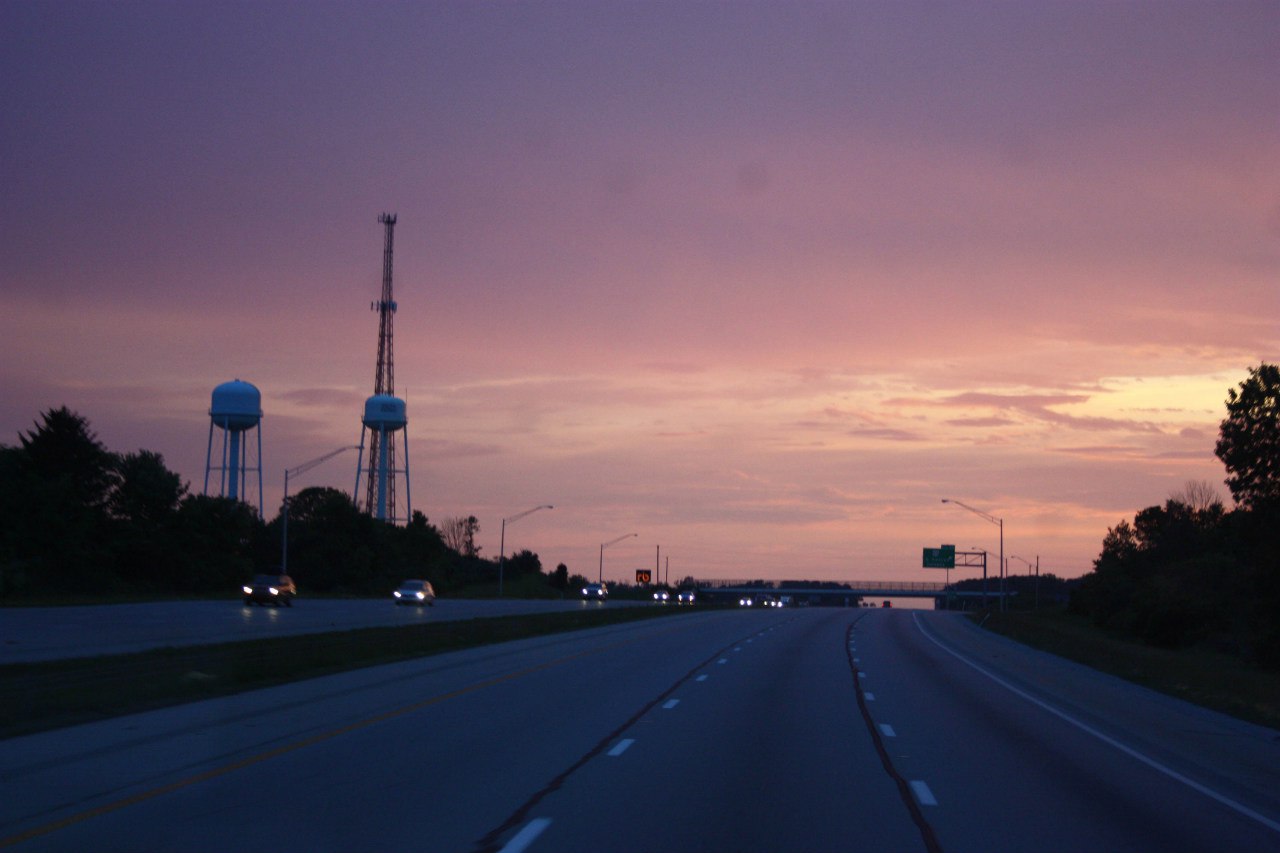 The rule I use, not only when I travel, but always, is this: listen to your intuition, open your heart to those who are worthy, but don’t forget to take pictures of their numbers :)))

You are probably wondering, how was the night in the truck?

George had a 2-level bed in his cabin. He slept up top, and I had a big comfy couch with a pillow and a blanket – no sleeping seated upright, no cold, no worries.

We woke up in the foggy middle-of-nowhere very early in the morning. 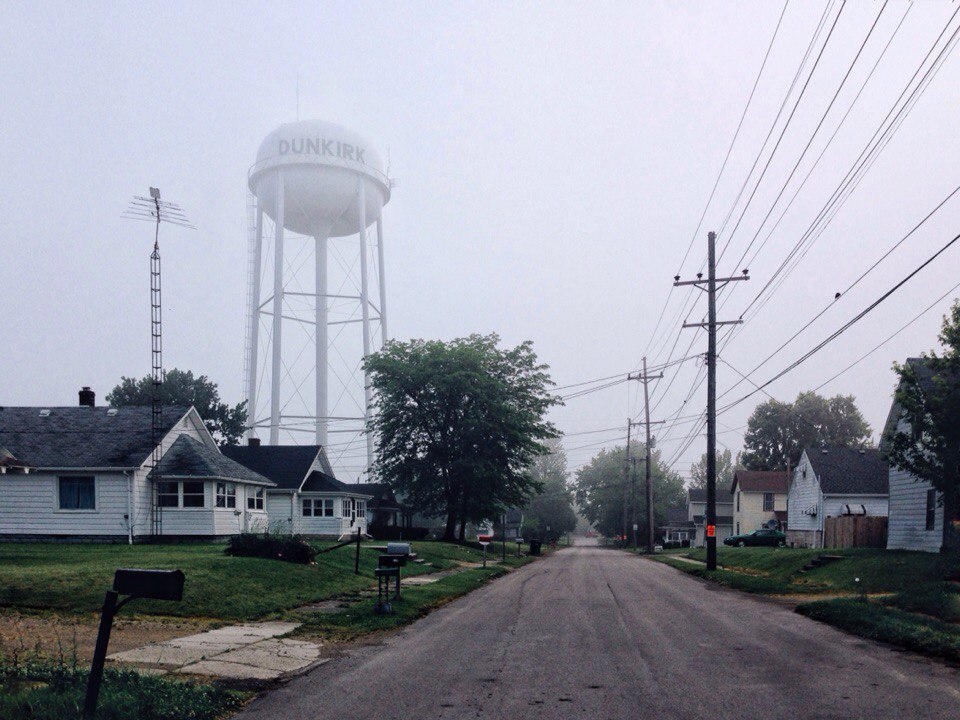 This is pretty much the view that was following me the rest of the day: green fields, dull skies and empty roads – really empty.

Very soon I said goodbye to George and stopped another truck.

Chicago was getting closer, but at the next stop I stood for about 20 minutes.

I started to get anxious. I never had to wait for a ride for more than 10 minutes before!

I was rescued by a another truck driver on a beautiful truck: bright blue, it was decorated with blue crystals and chromed details. 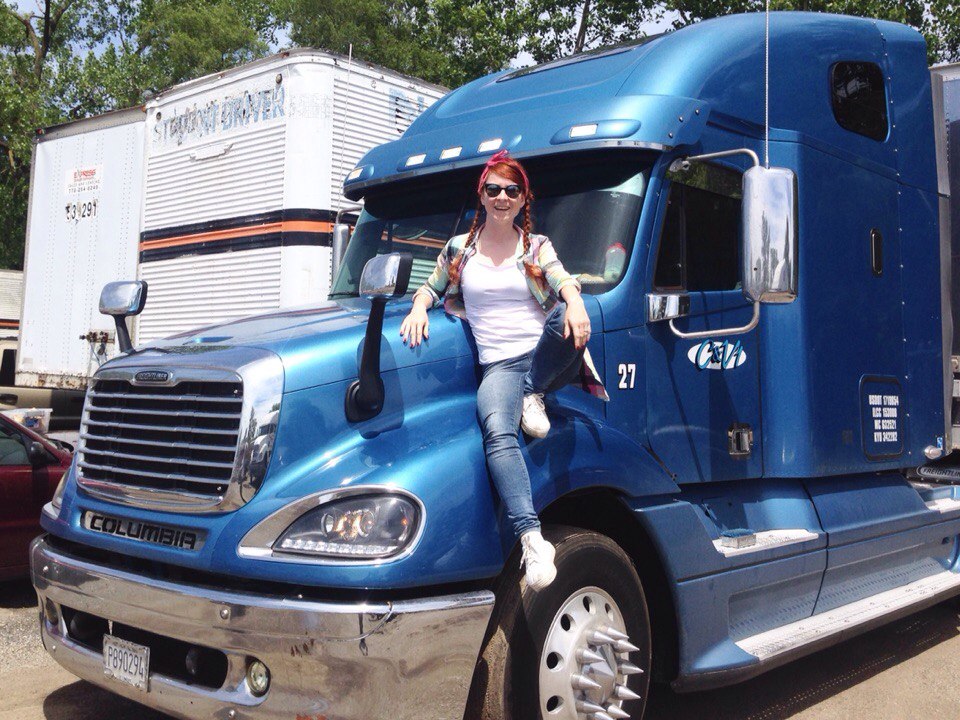 It was going to Midlothian – a southern suburb of Chicago. It had a train connection to the city and I thought that for the day my adventures had ended.

I was sitting in the cabin thinking that some days are just boring days when nothing interesting happens – you’re just going from point A to point B. I was saying to myself that I need to accept it and that I should be happy because of successfully getting to Chicago.

But life had one more surprise for me. When we arrived in Midlothian my driver said: “I can take you to the train station. Or, if you agree to wait for me for 5 minutes while I get my motorbike, I will take you to Chicago on motorbike.”

Train or motorbike, guys. What would you choose? 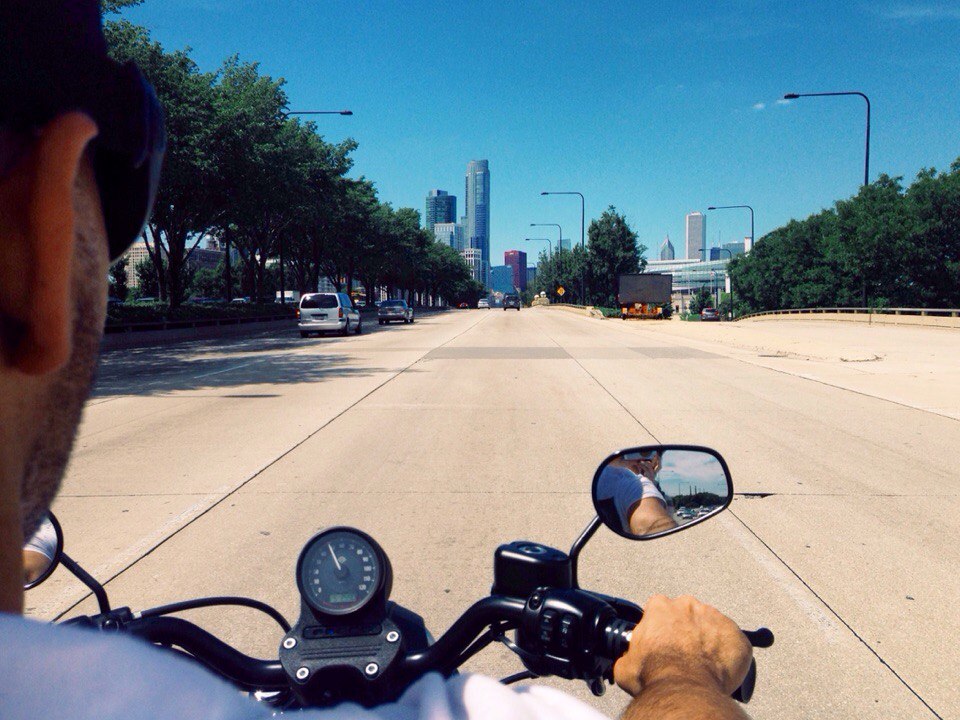 Here I am on a highway, going faster than all the cars, wind tangling my hair, skyscrapers arising ahead, lake Michigan greeting me with blue flares and Frank Sinatra playing in my head: My kind of town! Chicago is my kind of town!

This is where the written part of my hitch hiking story ends. There were still many incredible adventures and even more incredible people ahead. My favorite moments are in this video:

For my Russian-speaking readers there’s a full story in an interview for Paper magazine and a video of my lecture about the trip.